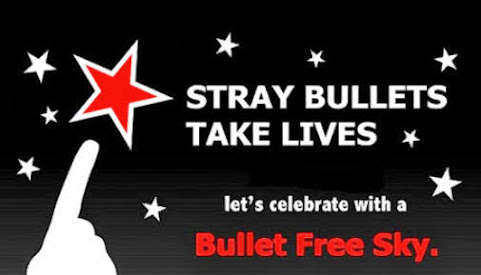 Given that the fireworks and gunfire celebrating the 4th have already started, there's a reminder that HOPES to avoid tragedy:

For the fourth year in a row, KCPD walked through a neighborhood Monday where they’ve had reports of celebratory gunfire. They were joined by Michele Shanahan-DeMoss and Brian Demoss, whose daughter, Blair Lane, was 11 years old when she was killed by a bullet shot into the air July 4, 2011.

It's an important reminder and one we'll repeat as the dumb-ass tradition of firing guns into the air is a cross-cultural tradition that mainly impacts low-income people already coping with increased crime and gunfire.

only second stupidest. The taxing districts and increases are worst of all.

The Cheifs ended a tradition of tail gating because they run their shit, Might be time the law in KCMO runs their shit and end the bullets in the sky on the 4th of July!

^^^ in theory, correct and I don't really disagree. But there's a big difference between running a parking lot and running a 319 square mile city.

Kc needs gun training. Responsible owners would not do this kind of thing. But instead of education, people would rather just take guns rights away.

"What goes up must come down"
Newtons law of gravity.

Our hood rats are so inept, it is actually safer when they are shooting at someone than just shooting into the air. They all use this sideways grip because they think it looks cool, but it is technically unreliable.

Fire into the ground.

^^^^^^No these animals are hoping to hit someone 8 blocks away.

@Save KC
Of course in the case of firing guns into the air, like most other aspects of public safety generally, homicides come to mind, KCMO really isn't a 319 square mile city.
The problems take place in about a 60 square block area.
If you want to catch fish, you need to go to the part of the lake where they are.
You would think that all the hype about "data driven government" would help.
But of course, data doesn't give people the guts to do what's really necessary.

While it's a terrible idea to fire a gun into the air bullets coming down will not kill anyone but can do property damage. Terminal velocity does not allow a bullet to reach a speed that will cause serious damage. The problem is the gun may not be fired straight up into the air, especially if you are mixing guns and booze. The little girl mentioned was not killed by a bullet fired into the air. She was killed by a bullet fired into a lake which skipped on the water and traveled much further. A terrible result of some idiots with a handgun.

@6:24 The hoodrats hold the gun sideways because that is the way they removed it from the box.


All I have to say is this city had better get it together because people are not going to stand by and talk anymore. These black people have become domestic terrorists and and the people have the right to fight back against terrorism both foreign and domestic. Lets clean out KC and take our city back!

^^Easy tough guy. You aren't going to do shit. You're a real tough talker for a keyboard warrior. Go watch Matlock..it's more your speed. Loser.

8:59 this is for you
https://www.minds.com/ColinFlaherty

9:31 I've seen all the Matlocks any other suggestions. Maybe one of your faves like The Talk or The View maybe the Bacherlorette?

^^Maybe go outside instead geezer! If you weren't such a prick, maybe you would have some friends to talk to rather than spend your wasted life here.