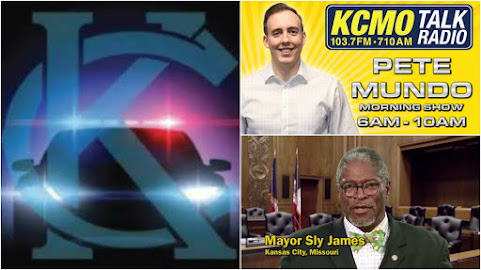 This week we convered an important KANSAS CITY EXIT INTERVIEW that revealed a bit of tension from Mayor Sly who is now officially a lame duck. Fact is, ever since voters rejected the Pre-K sales tax the Mayor hasn't really had much power.

And so, for Sunday night a TKC reader writes us back and offers this perspective that proves the City Hall honco's 8-years of ineffectiveness in finding a solution to curb crime.

This week police announced they're adopting a new approach to fighting crime in Kansas City.

This comes right after Mayor James said on Pete Mundo's show that they've tried "everything" when it comes to fighting crime.

Apparently, KCPD is scrapping an approach that was instituted in 2013. Mayor James was on Mundo's show June 18th, and news of the changes broke on June 20th. Was Mayor James unaware of this?!?! Or is he now so out of loop that he is no longer consulted on these kind of changes despite the fact he's on the Police Board?

Whatever the case, it's nice to see KCPD come up with a new plan given that what we've been doing for the past 8 year hasn't worked.
########

Mundo did a damn good job exposing Sly. The guy has never grown accustomed to asking tough questions even after 8 years in office. And on crime, he deserves to answer for the city's rise in homicides under his watch.

I'd like to see quinton try to do better. Doubt if it'll make much difference what he does, it has more to do with the availability of guns and violent criminals who aren't stopped early from moving up to greater crimes that do more serious damage. It's politically incorrect to punish young people now but that is exactly what teaches them to STOP before they get in more serious trouble.

Sly can still do a lot of damage, I expect to see some pretty big tax breaks pushed through before he's finally out.

KCFD also needs to come up with a plan to start doing their fucking job, Like answer 911 calls instead of being put on hold. Both departments are responsible for that, in fact I think the original dept that answers the phone is the police department. Maybe these 2 services can get together and make some shit happen for the citizens who pay their wages, but I wouldnt hold your breath!!!

^^^ You're welcome to grab a hose, biznitch.


Sly James destroyed Kansas City. The city is really unlivable now and Quinton Lucas will be as bad or worse. Take a look at his agenda plus the fact he's not qualified and he's a drunk who thinks he's 21 yrs old. He's a racist, (take a look at the 18th and vine and the MLK fiasco.) and completely against white people. Funny how the white idiots in Brookside couldn't see this. I'm looking forward to exposing anything Lucas does.

It will never happen, but, it would work. It HAS worked, but now, white people are terrified of pissing off blacks or being called racist.

Black people would MUCH rather see a ton of dead blacks lying in the street dead than admit that if the cops stopped black thugs and checked them for guns, then those dead people would be alive.

You know, I guess that ain't all bad.

The silver lining to the "Ferguson Effect" is an appreciable increase in the number of dead black thugs.

What is the body count under Sly James during his tenure in office? Please list the dead. Tried everything? I think not. Tried nothing fruitful... bingo JACK!

The reality is violence and killin' is condone at home in the inner city.

I think you all are being very naive. To hear you lot you'd think that this was a problem confined to Kansas City, & no where else, when in fact it's nationwide. You're trying to hold local officials accoutable for failing to stop a national problem.

The constant refrain of racial hatred does not help, it only muddies the water, but reminds us that many of you don't want the problem solved, you just want the dead to only be you black men. Some of you even complain that they are not being funneled into the prison industrial complex fast enough.

In Mexico the cartels routinely go into drug rehabilitation centers & kill everyone. Why do you think they do that? Because they don't want demand to be lowered. Just as the British, centuries earlier, did not want the Chinese to be free of the opium addiction that the British foisted upon them. They went to war with China to ensure that the Chinese would remain addicted.

Lessen demand by opening many more drug rehabilitation centers, & lessen supply by demanding that the federal government move directly against the cartels instead of pretending that a wall will keep illegal drugs from coming through the ports of entry. The fleeing refugees are not the problem, they are a symptom of the problem.

The cartels are the problem. Wage war against them, & not innocent women & children that you have deluded yourselves into believing are dangerous criminals. The children of our cities need real jobs that pay a living wage so that they are not lured into becoming addicted drug dealers mostly making other people richer while they still live in poverty. They are killing each other over territory, & committing other crimes for the money to fund their addictions.

Sometimes white people are killed, too, & that is the only thing that you really care about. Read the comments & you will see where the racial haters are actually cheering on the killing, & complaining that being raised in an urban environment means they aren't very good shots.

Of course, racial hatred fuels your insistence that these refugees are the problem.

Sloe deserves some but not all the blame for crime being out of control. He really didn’t care enough to even try to reduce crime. The liberal fag judges are to blame for being soft on criminals. The most blame goes to our worthless prosecutor, Jean Petersucker Baker.

KCPD officers responded to a radio call for help when a man in a bow-tie began rambling incoherently!!!

Black cultural change and improvement is what will change things. Then add real economic support. There is a failure of black leadership.

Sly without the pr machine on high is not impressive

SLie may be a lame duck bit he can still make things a lot worse for Lucas. Do not put it past him as he is very vindictive when he does not get his way. SLie is still pissed that his chosen one, JoLie, failed to win. Failure is the theme of Slie's reign.

Interesting that the chief equates large rewards with lower murder rates (at least on Omaha). As rewards are an incentive to turn in a criminal for a crime that has already been committed and therefore doesn't act as a deterrent, it's logical to assume that the majority of killings are being committed by the same individuals. I didn't know that black on black killings in the hood were the work of serial killers.

The black side of town hates him - and the white side of town loved him. That say all you need to know about this guy.

Don’t forget KC doesn’t have a city jail or contract to house inmates. New Jack City up in this bitch!

^^Nah..you don't forget. I have a life and subsequently better things to do. You don't.

Struck a nerve with you did I? Poor baby, go find your blankie, teddy bear and safe place quick before you lose your mind!

sLIE having a meltdown today

^^same would be said of you dope.

^^and yet KC remains vibrant and terrific. Weird.

When is Lyin' Shit James last day in office?

What's it like to be so bored, so lonely and such a loser that you're talking about an outgoing mayor on a beautiful summer day?

"When is Lyin' Shit James last day in office?