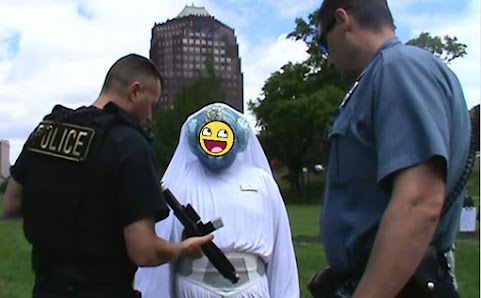 The Kansas City fight over abortion is bringing an interesting cast of characters into the local discourse.

On Sunday we noted that both Quinton Lucas & Jolie Justus were at the scene of a KCMO abortion rally pressing the flesh and attempting to earn votes during silly season.

We reported that NO ARRESTS had taken place at the rally of thousands of protesters.

In fact, Kansas City police protected the crowd so well . . .

We reported that KCPD advised the protesters to put their toy guns away and they complied but KICK-ASS TKC TIPSTERS share a quick view of the interaction which kinda puts the whole rally in perspective.

Special thanks to KC Citizen Media:

Take a look and listen to all of the speakers at the recent KC abortion rally.

Fox4: Protest and rally on Missouri abortion bill draws thousands at the Plaza

So some gun nut could have a hidden deadly weapon ("concealed carry" they say) but these weirdos get hassled for holding a platic toy?? My silliness detector is going haywire ...

That was always the problem with protesters against President Bush during gulf war II.

You'd get really dedicated people who had great intentions together who were honest about their opposition to the conflict and the a few druggies would turn the whole thing into a joke. Back then there's always be a guy in a cat in the hat outfit with glo sticks to create a distraction. This time I think the protesters are less distracted. And stuff like Baby Trump provides a good mix.


Good for Missouri! Protest all you want but if you want to kill your baby then go to the back ally with a quack and a dirty knife it serves you right.

You're allowed to open carry, i'm pretty sure. I'm guessing the type of dude who dresses up like a star wars princess gets pushed around by the police

Can we do retroactive abortion with these kooks?

Sounds like a crowd of fucking weirdos. Those who kill babies and those who feel the force within them.

Radish, your “silliness detector” is going haywire all because some anti gun nut freaked out over a TOY GUN. Get a grip dude.

Conservative hypocrites, you supported Kristen Kobach and his toy gun. This is the exact same thing.

Radish, as a proponent of the concealed carry and even the open carry laws, here's where the transgendered Princess Leia went wrong. That could probably have been written up as brandishing a weapon. To my knowledge though I have not read the laws specifically, I would guess open carry weapons are to be visible and holstered or shoulder fired weapons slung (shoulder, back, chest). I'd bet this nut was swinging it around being generally obnoxious. Notice the heavily armed dudes last year didn't get harassed, because they were properly carrying and probably very respectful of the police.

Remember that time in Dirty Dancing when the girl got the abortion? Yeah, that was awesome.

5:03 you seem to forget the uproar he caused using that toy gun, lefties were crying and running for their safe spaces, they demanded he quit using that Jeep and fake gun, scared the little sissies to death! Hahahahaha!

It would be nice if the sissy left remembered what they did five minutes ago before crying foul over the same thing they did a year ago. I’m not holding my breathe.

On Sunday we noted that both Quinton Lucas & Jolie Justus were at the scene of a KCMO abortion rally pressing the flesh and attempting to earn votes during silly season.(TKC)

... of course they were, 2 demofuck candidates trying to Win the top position in this city. I watched their debate tonight live and it gave me diarrhea, when I came back from shitting my brains out, I realized I was watching Obama and Ellen...what a joke to Kansas City tax payers these two puppets are!!!. They promise things they KNOW they cant deliver! anyone who has lived in KCMO for more than a minuet have watched the government circus in this town and know its all Bullshit, Pesident Trump might be a douche but at least he is following through on his campaign promises!!!! These 2 clowns will just be like Sly, and nothing will ever change in KCMO as long as one of those 2 fucktards are in local office. The city council is a shit show too, just throwning that out there!

All protests should be held in the ghetto, why is it my rich ass spending a ton of cash on the plaza has to deal with this blight?. All I see is under privalaged white women, black women, mexican women protesting for pro life etc etc etc. They need to take their crazy out of the Plaza!!!, and take it to Westport its up the street, take it to the Cross Road District or Waldo where all the gay people live. or how about you March your purpose in your own neighborhood!!!, and do a study on how many neighbors once you do put their home on the market. Democrates are cochroaches and if your neigborhood is full of them, either you will stay and enjoy or you will get the fuck out of there.