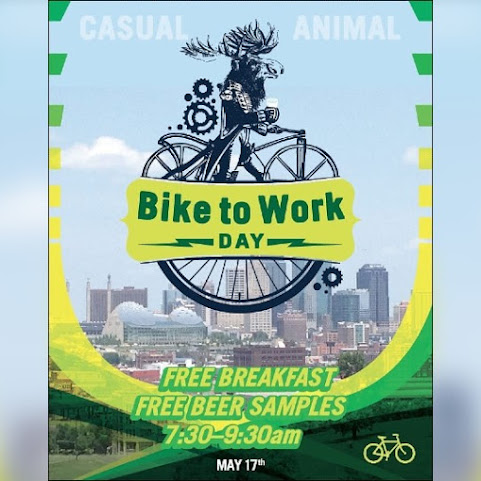 This morning City Hall is pushing a public relations stunt to support the cyclist crowd after residents and voters seem to be growing tired of this expensive advocacy scheme.

Join city staff and elected officials in celebrating #KCBikeMonth and National Bike to Work Day with a bicycle commuter coffee stop at 13th and Grand TOMORROW morning from 7:30-9:30 a.m! Bagels, coffee, and high fives will be provided. 🚴‍♂️🚴‍♀️☕️🖐️#BikeKC

FRIDAY MORNING WILL ALSO GET BOOZY FOR MANY OF THESE KANSAS CITY BIKE ADVOCATES WHO ALWAYS BLAME DRIVERS FOR DANGER ON LOCAL STREETS!!!

Critics call out this odd paring . . .

Teaming up with @BikeWalkKC to give free beer to cyclists during their morning commute.

Just when you thought bike lanes were unsafe... "Here, hold your beer."

YOU'VE BEEN WARNED!!! BIKING WITH BEER IS THE NEW HOTNESS ACCORDING TO 12TH & OAK AND THEIR STRUGGLE TO MAKE LIFE HARDER FOR DRIVERS WHILST TOUTING HIPSTER CULTURE!!!

Cars are a thing of the past. Don't cling too tightly, the penalty for drinking and biking is little to non-existent. Altogether a better way to travel.

^^^ That's the thing about bikes isn't it? Less damage when things go wrong. A biker isn't going to crush a person of a family to death if they're drunk. THey're not moving at 80 miles an hour, you can get our of their way.

So let put this in perpsective with an apples to apples comparison. Drinking and biking isn't great but not nearly as dangerous as gas guzzler cars.

4:19 until one of these idiot bike riders gets drunk, drifts into oncoming traffic and gets killed by a normal person driving a car. You bike riders always accuse other people of screwing up when most of the time it’s the bikers fault. You people tend to leave out the actual facts.

Who has jobs like that that will allow their workers to hang out for two hours, maybe get drunk before coming into work? Nobody.

This is nothing more than “city officials” getting out of work and slapping each other on the back telling each other how great they are.

If you want more rights than anyone else become a liberial lesbian transgendered triggered bicyclist that works for the city.

I want to see video of Sly James and Jolie Justus trying to keep their fat flabby asses upright on bikes! (I've seen both of them drunk already.)

DUI is DUI unless you're Quinton Lucas.

@4:19 - sorry you lost your Drivers License after that DUI,
try moving to Kansas, they'll license anybody!

Since the bike riders are faggots, can’t they just celebrate by sucking each other off?

Why is "Bike to Work Day" held in May?
Most people have jobs 12 months a year.
How about "Bike to Work Day" in January.
The participation might not be quite the same.
KCMO government involves itself in more ridiculous "events" than can be counted, yet when it comes to basics like safe neighborhoods or decent streets, they never show much interest.
Government by short attention span toddlers.
And all at taxpayers' expense.
What could possibly go wrong?

I am all for logical cycling. What is not logical is a guy cycling down Nall at 5 mph at 8 am. Lets get the bike lanes everywhere so they have a safe lane.

You can get a dui riding a bike. And the city condones it. why?

Yeah let’s all get our bikes and stand around slapping high fives! Because a bike is such a better choice than taking a “gas guzzling” Prius or Tesla from the northland to downtown.


I get it the people who don’t own cars and live in a small bubble, but get out of that bubble once in a while. It’s good for you.

They normally suck each other everyday. This is different. This is a celebration. After it’s over, they will resume sucking each other, as usual.

The city screwed us on armour Blvd and they want us to try and forget it.

Not going to happen.

Kind of a hot sunny day to be drinking any alcohol after / before a bike ride. Gatorade or ice water is all I wanted after riding in this morning. But then again I'm just a guy who gets around the city by bike (license issues) not a self-annointed bicycle activist so what do I know?

P.s. weird projections going on here always calling bikers "fags" &c. and getting all raged out at the idea of sharing our roads with bikes. Maybe you just resentful at your long commute to a dogshit job ...

Bike to work. Arrive covered in sweat, soot, and with a dog hanging onto your ankle.

Maybe you should spell your name “Ra-douche”