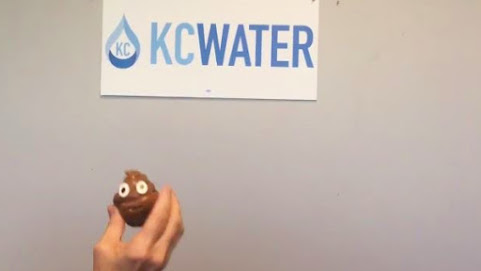 "A weekend flash poll of likely Kansas City voters discovered that recent warnings about local water quality have inspired negative feelings directed toward Mayor Sly James and City Council members. These same voters then responded that they were more likely to vote for a City Hall outsider than someone who had experience at City Hall. This trend holds up to real life scrutiny given that a last time a Kansas City councilman was elected as mayor was in 1991."

Among more than 500 voters questioned the common theme was this:

KICK-ASS TKC TOP ECHELON INSIDERS offered their perspective from this weekend flash poll and one respondent could be heard over the phone talking at the top of his lungs . . .

"They keep charging you more and more . . . The water bills are sky high but you can't drink it?!?! What kind of ripoff is that?"

And so . . . It seems that residents fear Kansas City moving toward a future that looks a lot like Flint, MI with water infrastructure contributing to health problems and opening the floodgates to municipal bankruptcy.

I blame the schools. I guess they're not teaching math or more people would know that you can't spend money on trains and airports and still maintain sewers and pipes that are nearly 100 years old. It doesn't add up.

Sly's legacy. Flooding, floding everywhere but not a drop to drink.

I know they keep saying that it's safe to drink but they said that in Flint right until they started delivering the lead warnings. I don't think I'm being paranoid and some healthy skepticism is merited. Wish the Water Department would have done more preparation with this.

If you're mixing it with scotch. You won't notice.

Don't blame the schools or the people or the voters.

Blame the people who sold KC Water to Burns and McDonnell. They deserve some scrutiny over this. They run the show.

This is such a poorly run city.

^^^^ !!WRONG!!
Lives with Mommy, Hasn't been able to get up the stairs and go outside for fifteen years!

Independence has award winning water, and Blue Springs and Lee’s Summit use it as well.

Fluid Whatever What Am I Help said...

So the local gay and lesbians can don't have to worry the water.

First of all, we don't know Who conducted the poll, or how many people were polled or what the margin of error is.

A better question is why would anyone conduct a poll on this when any reasonable person already KNOWS that the flooding, and the water quality associated with it, is to blame.

Conclusion: barring a link to the actual results and methodology, this is made up and fake. There was no poll.

Sly, is that you?

Tell Me A Little Lie To Remember You By said...

"A better question is why would anyone conduct a poll on this when any reasonable person already KNOWS that the flooding, and the water quality associated with it, is to blame."

And in KCMO, if you don't like the "services" provided by city government and you blame the incumbent mayor and council, what do you do?
You RE-ELECT them or even elect them to positions to where they can ignore you even more and do even more damage!
You really can't make this stuff up!
Hahahahaha!!

I blame it on the flooding.

It's the high river level, morons. Jesus. It's as plain as the nose on your face.

Why not enjoy a delicious glass of KCMO tap water this morning to start your healthy day!

This is what happens when sane, long-range fiscal planing is replaced by glow in the dark construction projects and huge long-term debt. Dissent within the masses.

City Hall's worse fears are accurate - the People are revolting!
(They've always thought so, and now it's becoming fact.)

Shouldn’t the city be prepared for at least moderate flooding? The mayor and city council have failed. The water has been bad for years and the rates just go up..

..and yet the water hasn’t been bad for yeasts. Weird

Yes, I blame the mayor for all the excess precipitation upstream. That's right! It's undoubtedly a Democrat scheme to control the weather.

But hey here's a serious question.

How'd y'all get to be so goddamn dumb?

Hey you asshole complainers! We need the new magnificent airport, the FREE toy train and its extension, more help for 18th and Vine and MLK signs up.

These are important, as well as everything downtown and around Power & Light.

So suck it up (the water) and give some credit to the Gipper. Vote for all the incumbent council members who work so hard for us peons.

It's Got What Plants Crave said...

Well the media is doing it's job today

Welcome to Kansas City, heart of the New Midwest.

And yet it’s an incredibly vibrant & fun place. Weird.

^^^ Yes your obviously weird for considering all this shit to be vibrant and fun.

Well it's vibrant, fun if your from rural Kansas or Missouri where the local dairy queen or Walmart is the only excitement in town.

KCI photo op party is comparable to standing in a hole six feet deep thinking your at a ground breaking ceremony.

Did anyone notice that the city notified the state on the 17th that they failed the testing but didn’t tell the citizens until the 23rd? Weird.

Thinking you're witty is comparable to knowing the difference between your and you're.

You are wrong most of the time.

Did anyone notice the city has 30 days to notify the state?

Evidently not so weird.

The Kansas City and Flint water problems are comparable only in that both cities had a water problem. In every other way they are dissimilar.

Plus, the Flint water "crisis" was primarily journalistic hype. See:

(Pro tip: don't click on the link unless you can read.)

Hey you cant drink it and you cant drive on it but we have a nice new area at 18th and Vine and a nice new Jazz Museum with (40) directors with full benefits. Total investment here is in excess of $150,000,000. Thanks to Sky and his gang, Quinton, Jolie, and Reed.

Did anyone notice the problems of this shithole are multiplying?

KC water gives you the runs.

it's a steve miller poll, they called me and I told them to suck it! Will not vote for that GOP goon.

3:49 so are you saying that the problem may have happened in February? If your 30 day rule applies that is. The point being made is it took the city a week to notify the citizens there was a problem. By your expert opinion we should’ve have been told about this a month ago making this problem worse than they’re admitting to but this is what we’ve come to expect from sLIE and his clowncil. Evidently not so weird in corrupt city.

5:44 I’m voting for him or clay, these two are our only true hope. You can vote for the others if you like broken down infrastructure, murder, high water bills and high taxes, I’m done with the idiots in charge now. #timesup

Although the water might look or smell strange, KC Water said it's nothing to be worried about.

"The color comes from water we're getting from some of the different tributaries, which have a color in it, and our treatment process is not set up to remove the color," said Mike Klender, KC Water Treatment Plant manager.

Evidently not too scrupulous, weird.

I don't need a poll to tell me that KC water stinks. I just pour a glass from the tap and take a whiff. Smells like crap to me.

It's too bad the art of politics is telling people that a turd in their thermos is a sign of progress.