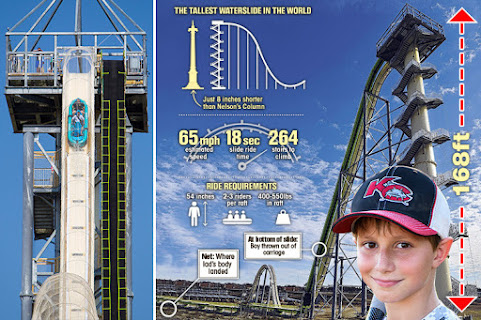 Gee to hear you tell it your AWESOME BLOG COMMUNITY was entirely responsible for the charges in the first place.

So way to go. That proved nothing, like usual

Tracy is gonna be pissed.

Oh Tracy will not be happy for sure. But was her opinion rather we all liked it or not. It was a freak accident that happened on a ride designed to scare the crap out of you. Overall the smart thing would have been to have never built it but many thousands of riders and close friends will disagree with me on this. To this day I still hear those that wish it was still here so they could ride it some more. The thrill of walking to the edge of death is still very much in demand by the masses.

More people die in a month riding dirt bikes than ever did on that monster slide and nobody is charged with murder or such while screaming for the removal of all dirt bikes so I say it's time we move on past this sad event and carry on as should have been done with this in the very beginning.

^^Well you're in no position to say it's time to move on past this. You are of no consequence or substance so it makes no difference what you think.

^^except, and this is real key here retard, I NEVER SAID IT!!!!!! I see your comprehension skills are lacking. Work on it. Retard.

First 1:29, You be sure and GO FUCK YOURSELF ALONG WITH THAT OTHER BITCH

Did they ever have the kids head?

Despite "...multiple abuses by the Kansas Attorney General's Office in the grand jury process" there is only 1 mention of an assistant attorney involved in the 3 links.

I'll fill in the blank.

That would be Kansas Attorney General Derek Schmidt. The same AG that said Kansans have no expectation of the state protecting their social security numbers contained on voter rolls. Individuals have no recourse when an incompetent state official like Koback exposes them.

Let’s hope Schlitterbahn can go after Derek Schmidt to collect financial compensation for damages caused by his frivolous prosecution.

Schmidt should go to Washington to help Brownback. Look at the attorney general’s record - last year, two maintenance workers who had been indicted for lying to investigators were acquitted. And earlier this year, two charges related to allegations that Miles had obstructed the investigation were dropped by the Kansas Attorney General’s office.

4:33, there has been no ruling that the prosecution was frivolous. Dishonest and unethical, yes, but not frivolous.

From 1990 to 2004, there were 52 deaths associated with amusement park rides in US alone. Using Schmidt’s thinking process, that would be a lot of criminal trials. The guy is a typical Topeka nut case.

There have been 24 deaths from the Takata exploding airbags. Company officials have admitted that they tried to cover up the incidents. How many criminal charges have been filed against their officers?

Hundreds of areas teenager will no longer have an opportunity for well-paying summer jobs, the county & state will lose thousands of dollars in sales tax revenue, and the ancillary spending of out­ of ­town visitors at local establishments outside the waterpark, such as hotels, restaurants, and retailers. Not sure the interests of Kansans were well served by the Attorney General’s dishonest and unethical attempt at prosecution.

Derek Schmidt is incompetent. this was not a frivolous case. It was just wildly incompetent prosecution, by our AG. (Who other than being cross eyed, looks exactly like the smug actor in the National car rental ads. Derek had never tried a Murder 2 case. He wanted to keep the case in house, (ego) so was assisted by an equally inexperienced asst. AG. He clearly should have referred it out.

One must remember, the reason it was not handled, as it should have been, by the Wyandotte County's DA was--
a. The experienced guy retired
b. The new guy had no experience and booted it up to the state.
In volleyball, that's called an "assist".
c. The county was at least half responsible for the DECAPITATION of
Caleb Schwab, because their Gang of Five--a committee of men
without training in design sat around a table over sammiches
and said, roughly, "We gotta show some control over these Texas
assholes. Not just rubber stamp their plan. So howsabout we
make em put a net over the slide, and hold that in place with
some metal HOOPS!
d. (One of the five was some sort of planner, but others were just
the usual Dotheads, some guy from the most corrupt utility in
America, the BPU.)
e. It is a fact that it was the hoops that decapitated Caleb.
f. And then it was the netting that held the head up there for hours
and had to be cut down. Caleb's mom did not even notice,
she was so traumatized, seeing her son's (headless) BODY lying
on the tarmac. I know this from a police officer there, sworn
to secrecy.
g. So how could the county prosecute itself?
h. How could the police department report their own bosses--
county administration in charge of their budget?
i. THIS WAS A COMPLETE CLUSTERFUCK.
j. And the media still refuses to report the truth, it was a
decapitation. Or as the UG police officer tried to call it,
"a serious neck injury." Jesus.
k. No, Schlitterbahn and your attorneys, it WAS a tragedy,
AND it was a crime. AND the final crime was the incompetent
legal prosecution team by our state.

I am grateful that Scott Schwab's family got some closure with their
private settlement.

I am embarrassed for the citizens of Kansas. The AG, Derek Schmidt, has clearly been outed as inexperienced--and lacking the basic
judgment to REALIZE it.

He doesn't cut his own hair, change the oil in his car, or manage his own website.
AG Derek Schmidt, a simple Topeka attorney used to fixing tickets, should have known he needed an experienced attorney to prosecute these cases.

I'd also add:
Carl Cornwell is a fine, fine defense attorney if you are ever charged with a major crime.

I don't know the other defense attorneys--forget their names. They did a great job for their despicable clients, especially Jeff Henry.

Who I hope gets a big sentence in Joco for his other pending charge.

BTW, despicable is not a defamatory thing to say about Jeff Henry. The truth is its own defense.

I did have to laugh when Jeff Henry was caught as he was in Joco. Defense attorneys have a challenge trying to control their sociopathic and reckless clients.

Do I think the state of Kansas will refile these cases? No. Insanity is doing the same thing over and over and expecting a different outcome.--who said that? TKC intellectuals, please weigh in.

AG Derek Schmidt could not possibly take enough remedial law seminars or crash courses in How to Prosecute a Murder 2 Case to refile. He might as well just let is SLIDE.
(Gallows humor intended.)

The next time there is a major murder case in Kansas, I hope a future AG will have the balls and the wisdom-- to refer the case out, to an experienced professional.

I've since changed my view of this case.

JoCoPost- nobody cares about your ramblings. You are truly a nut case.

Zero now, but if an airbag ever kills the kid of Kansas Legislator, look out.