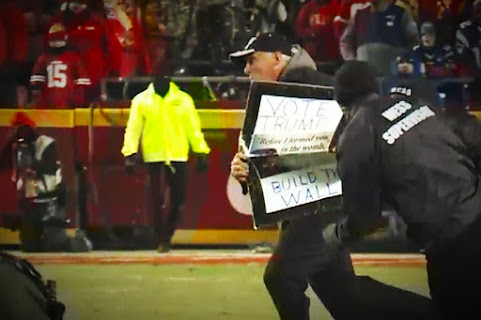 Along football jock supporters in costume or just bundled for warmth last night, a local dude attempted to hijack the less than historic event with his political statement in support of the MAGA agenda.

WAS THE PREZ TRUMP FANBOY WHO RAN ONTO THE FIELD WITH A "BUILD THE WALL" SIGN A CRACKPOT???

WAS IT A SIGN THAT THE RIGHT WING HAS BEEN SILENCED IN KANSAS CITY?!?!

Either way the irony is delicious given that this old codger had to jump a wall and pass security in order to make his illicit display and now might face charges for his public disturbance which violated the rules of admission.

And still, the shut down continues in Kansas City and beyond with very little progress as the economic toll worsens.

BBC: Trump wall - all you need to know about US border in seven charts

Deport him to Ukraine.

True American give him the key to the city.

Hey, that guy moved pretty good for an old timer. Right until he was slammed down face first on the frozen field. Bummer.

Crackpot breaking his own rules.

Deport you to Iran pinko

I support his right to free speech. Maybe running onto the field was a bad idea but he obviously felt strongly about his message and deserves to be heard. You can't doubt his commitment. He went all in and did so relatively peacefully. I think he would find that a lot of people and fans support his statements.

No wonder chuck was so pissed last night -it was him! There he is, Chuck Lowe, in the flesh folks! TKC's finest! Way to go dude!

Used to be that everyone got fifteen minutes of fame.
Now with social media and greatly-reduced attention spans, it's only around 15 seconds.
But EVERYBODY is a celebrity, so what's sadly lacking in talent and quality is more than made up for in numbers.
Life as entertainment.
What could possibly go wrong?

Peacefully is key here, the dummocraps would have maimed or murdered someone to get their unamerican messages out. The violent left is dangerous to the health, safety and well being of this country.

^^^ This wasn't "peaceful" he broke the rules on his ticket and endangered the players. He should be prosecuted! Total hypocrite and typical republican who couldn't even afford to buy an ad rather than just try to get something for free.

But I'm a liberal so I acknowledge he also deserves compassion.

I would also agree to getting the guy the help he needs. He might have mental health issues. Most Trump supporters and people who want to build the wall do.

That was the best tackle by the home team all night.

Reid should have benched his secondary and played those security dudes. They certainly hit harder.

If he was a faggot trannie dressed up in his girl uniform., Democucks would defend to the death his right to free speech.

What's interesting is normally announcers will belittle anyone that runs on the field. They won't show it in real time, but they have to explain the delay and will say something like "some drunk idiot just decide to stop play...".

But the sign was well prepared, so it wasn't a impulsive drunk. The producers were probably signaling the announcers to avoid any comment because it was political.

Image the blowback today if they said "this idiot..." on air, only to later realize the ridiculed fan was a pro-life protester. The boycotts against the 'anti-Christian' CBS network that 'hates our President' would have been well underway tonight. CBS dodged a bullet.

That said, the guy is a true MAGA idiot.

That’s Angela K’s old man. After the game he pistol whipped her while watching Hannity.

What's the big deal?! He was doing a "resist". Yeah, that's it. Like BLM, Antifa, Mudzoory Cooniversity fake hunger strike tent city on campus with Nutty Professor Click---this dude was just a "disruptor".

8:08 you’re an idiot, he didn’t hurt anybody unlike your kind who will do anything including murder to get their point across, typical no class uneducated moron all of you are worthless cucks.

If players can demonstrate, so can fans.

He's out there being active.

He should be ridiculed in the same way Royals drunk Fountain Lady was a few years back.

About a dozen posts appeared here to identify who she was, where she worked, the various court appearances, and then just to mock her on slow news days.

Let's get that crack staff started on this guys background story, follow through on the filing of charges and pleas, and update until the final 'where are they now' story is needed.

I thought real Trump fans were boycotting the NFL.

Where was the sign about firing the knelling black sons of bitches?

Build a wall along Trooste.

He wasn’t blocking traffic on the road so I couldn’t drive to work, like BLM and fight for 15. He wasn’t beating anyone or starting fires like antifa. What’s the big deal? People run on fields all over the world and no harm is done.

Any supporter of Trump who was there or watched the Game on TV is a Hypocrite!
Don't you remember "Old 45" telling you that everyone in the NFL is a Commie?

3:23, you thought wrong. Not the first time, certainly won't be the last.

I was there, it was hilarious watching his old ass get body slammed to the turf! Then the cops jacked his arm way behind his back while he squealed like a pig!! They roughed his crazy ass up! Stupid fucking geezer! You could see his saggy Depends as his pants fell down while they were carrying him off the field!

Damnit, what happened the usual streakers?

Jungerman out on bail?

Bitch, you’re too much of a fag to have been at the game and even if you wanted to go and spank your monkey under a stadium blanket you couldn’t afford a ticket. Try again.

The fake news at CBS won't show you what happened. Enemy of the People.

I ignored my NFL boycott to watch my favorite team win bigly. Contrats Tom Brady and Bob Kraft! I will have Hamberders waiting for you after the Superbowl.

Fuck the low IQ Chiefs and their shithole city. MAGA!