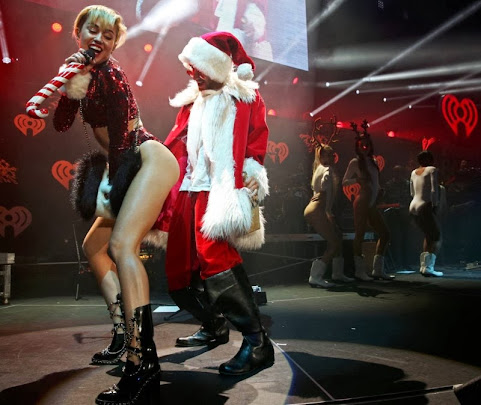 Because this town is awash in recycled X-mas music and most of the newsies are busy running up credit card debt whilst going less than half speed, a bit of counter-programming is apropos for tonight's news junkies.

To wit and looking forward to seeing if Miley offers the full monty tonight on SNL . . .

Words of wisdom from a local leader and former KCMO Council Lady off the record and on the QT:

"Time Out for the BS from City Officials. Don't go for the Okie Doke because you and your kids receive toys, a turkey and a Holiday Party . Tell them you want the same perks the developers, campaign donors and their cronies receive. Just because our address is East of Troost Avenue doesn't mean WE aren't astute. Run and tell that!"

That's absolutely accurate and a great holiday season reminder to voters of the vigilance the X-mas season requires.

Accordingly, and EXCLUSIVE for our blog community. Here's a peek at what we can expect during the holiday season:

- $48-MILLION For The New Airport That Will Clandestinely Come Through The General Fund And Break The Last Of #BetterKCI Promises.

- MORE Than The $27-MILLION For Downtown Luxury Living Space Parking Paid For By KCMO Taxpayers Unwisely AT The Outset Of A Recession.

And so, while locals are smiling over charity news, these big money deals threaten to bankrupt KCMO taxpayers and put future generations into an endless cycle of debt.

More to the point, we must reiterate a common mistake with holiday warm-fuzzies intended to confuse the public about real life amid growing American income disparity . . .

Here's a an important list compiled by the good Catholics at St. Mary's that explains commonplace Christmas confusion:

And all of this inspires our playlist tonight at the outset of the Kansas City Christmas Season 2018:

Don't be such a bummer. Actually, the cheer isn't so "pointless" a lot of people get bummed out during the holidays and the local suicide rate grows higher. There's no point in being cynical because people do that for themselves. If some coverage makes people happy, there's nothing wrong with that.

Btw, Miley has shown her backside enough that it's no longer a very big surprise.

Agree with the first comment. No use being a grinch and pissing in the punch bowl. There is good journalism out there and if people want to make their edges less sharp during the holidays, more power to them. It's not like KC has a lot of investigative journalism anyway, most of it is is just press releases from developers.

Hoping there is more resistance to the MLK rename. If they ram through during Christmas it's not really a "win" for the revs, just an indication that they're willing to screw over most voters. It will cost them more in the long run.

Don't forget about that Christmas murder count. Heard a bunch of sirens tonight, it's bound to get worse.

So sLIE would be considered the charity for developers then?

Charity should be help for the needy.

Unfortunately a lot of that is picked off by deadbeats.

Justice is when deadbeats land in jail.

12th and Oak definitely wants charity to do the work of justice.

Miley's backside has seen more mileage than a '57 Chevy.... with her Daddy at the wheel.

It's when kc voters are really distracted.