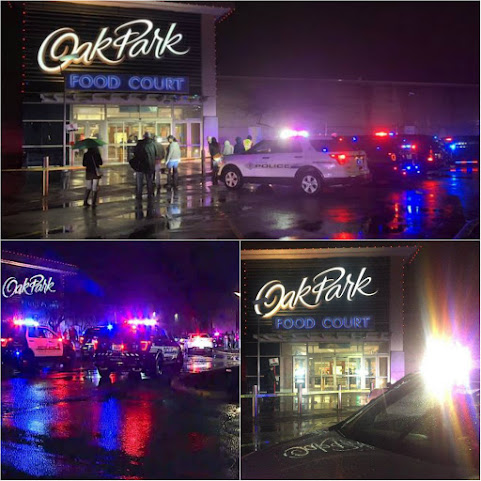 One of the last shopping malls in the metro suffers another spate of bullets flying and rampant fear.

YET AGAIN OAK PARK MALL ENDURES ANOTHER GUN FIGHT AND PANIC THROUGHOUT THE SHOPPING CENTER!!!

The latest gun panic took place back in October.

Police said several shell casings were found outside of the mall just east of the food court. No victims or suspects have been found.

Several cars were found at the scene with bullet damage.

Someone heard what sounded like a gunshot. Police say there were shots fired but there are no signs of anyone hit. Some shoppers and employees said they were locked into stores for at least 45 minutes and it felt like much longer.

Police believe the entire incident took place outside the mall.

Police said customers are still hiding inside the mall and officials are working to locate all of them.

Dinner and show at the mall?

Time to close up shop.

I guess we need to FINALLY admit that the old retail model for the 80s no longer works and shopping malls in the suburbs are now a thing of the past.

Okay, you bags give the KCPD a lot of crap but OP is really tight lipped.

No suspects, no description, no confirmation.

They are not very forthcoming for news at the scene.

Suburbanites don't want public information. They just want to pretend that they're safe.

We all know who is responsible, they ruin everything

Hey look at me, I've got a racist comment because I can't articulate myself in a publicly acceptable manner that provokes a discussion so I spam Tony's blog!

I don't care about ideas, I just want to be anti social! Please look at me!

Who goes to the mall? Really. Why would anybody bother with that garbage. Total waste of time for overpriced merchandise.

Overland Park is the new Raytown.

I know what they need that will save the mall. I know how to turn it all around and get this shopping district out of blight and back into money making profitability.

^^^ Get help dude and get out of your parent's basement. .

What might have made these noble Wakandans act so savagely? Truly, colonialism must be to blame.

Personally, I can do without the mall but realize it is a big investment and means a lot to the community that surrounds it. It would be a bad deal for Overland Park if they had to close.

It looks like that Nordstrom's deal on the Plaza is looking a lot more viable right now.

I hear so many suicides by gun owners, well to do and crimes in Johnson county that you will never see on the news.

I was thinking that the mall seemed relatively peaceful over the holidays. I'm glad that nobody was hurt tonight but this is a bad trend and something that I hope will be addressed. I think we need more lights and security by the food court because it seems to be a hot spot for violent activity.

No doubt this is Trumps fault.

Good call. But maybe the troops from Syria can now protect this foot court.

I think the bad thing about this shooting is that there is no emergency system for people inside the mall to know the situation. Read that the police were still looking for people hiding inside the mall out of fear for the shooting. They need to have a better alert system and let the public know about the safety status inside the building. It's not the solution for all the problems but something that might help people feel just a little bit more safe.

I know!!! Let's build a wall so that only good people can come to the mall.

2 highly educated gentlemen of Afro-American descent engaged in a duel over who will pay child support for 6 month old Josiah Tyrone.

I miss the “pre-diversity” days of OP and Oak Park Mall. :(

Well well well, just wait until the mugshots come out on this one.

It is time for oak park to follow independence center and former African I mean Indian Springs and put a police annex in the mall right there by the food court. We should not have to have an alert system because going to the should be a fun peaceful experience. They need to keep these clearly dangerous Amish people away.

Goodbye Oak Park Mall, it was nice knowing you. In a few years one of the last things from my childhood will be gone, destroyed by the black termite. My junior high across the street? Ruined by the black termite. The duplexes across the street where lots of my friends lived with their divorced parent? Destroyed by the black termite. The one way to fix it will never be implemented. The city of Overland, the police, and mall management all need to coordinate to take measures to save the mall but they won't. They can't. If they do what needs to be done their lives will be ruined because they'll get called racist. I saw it on Facebook last night in the comments of news stations reporting it. If a person said something innocuous as "They are ruining it" was attacked by multiple people as being a racist. One of the many problems with black people is they cannot be told the truth and the truth is black people are ruining the mall. I don't know who did the shooting but I guarantee it was a black person. Apparently they were raising hell there all day yesterday. There was also a brawl there Christmas Eve. Lots of crime at the mall goes unreported because they keep it out of the news. Lots of carjackings and robberies. Why is it no other race does these things? Which other race shut down Bannister Mall? Black people are pathetic excuses of parents. Nobody else's kids do this, only black people. Go ahead SJW's, call me a racist but point out what I said that is factually wrong or incorrect.

Why? Well, a sketch of the problem might include sub-80 IQ, poor impulse control, total lack of parenting and structure, and a 'culture' that worships gold, tennis shoes, rape, and murder.