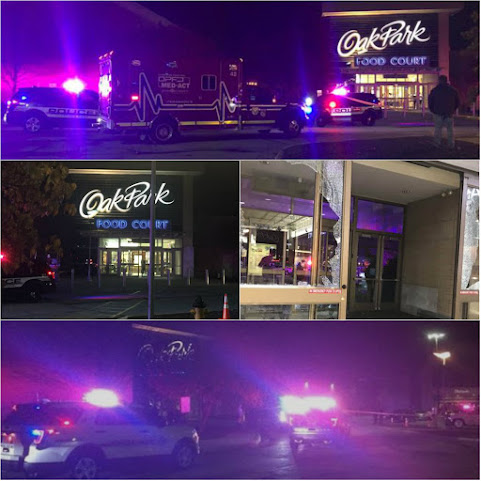 The holiday season is coming soon and bigger crowds bring bad tidings to this embattled local shopping destination that must also compete with Internets commerce.

KMBZ HAS PIX FROM THE SHOOTING SCENE INSIDE THE MALL!!!

KCTV5: Surveillance video that the Overland Park police have looked at indicated there were three men in the parking lot of the mall, then one man began shooting at the other two.

Those two individuals ran into the mall and the other man kept shooting at them.

The police believe at least one of those men was shot because there is blood inside of the mall, but they have not yet been able to locate either of the two men who ran inside.

KSHB: A OPPD spokesperson said the shots were fired outside the mall near the food court entrance.

Reporter Todd Dempsey is on the scene . . . His quote:

"Reports that the shots were fired into the food court. Lots of police tape inside and out here in the parking lot"

It was NOT an active shooter situation . . . Police are saying that the suspect was in an altercation before MULTIPLE GUNSHOTS WERE FIRED OUTSIDE THE MALL. TONIGHT . . .

Suspect vehicle is a red truck . . . According to one police source.

SUSPECT IS STILL AT LARGE!!!

OP police said they are still searching for a suspect. They believe there is someone injured, but police are still looking for that person.

KMBZ: Oak Park Police telling us there may one person hurt after blood was found near the doors to the Food Court. The suspect remains on the loose. A red truck may be involved. Shooting happened outside the mall.

KMBC: No arrests made after shots fired at Oak Park Mall

"Overland Park police said there was a fight outside the mall about 8:15 p.m. Friday when someone opened fire. At least one round shattered glass doors at the mall. People who heard the shots began running for cover in stores. No arrests have been made. Police describe the shooting as an isolated incident."

KMBZ: A few more images from inside the Oak Park Mall after the shooting tonight.