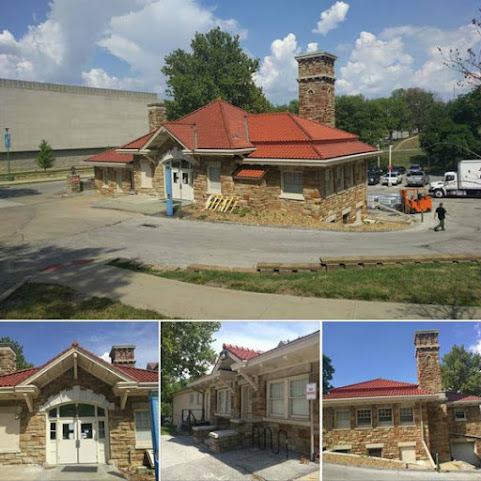 This afternoon we share an important alert regarding the city college annihilating one of the last remaining structures that makes their campus unique.

SHAME ON UMKC FOR PLANNING THE ANNIHILATION OF THE CARRIAGE HOUSE IN ORDER TO MAKE ROOM FOR A DRIVEWAY!!!

While university scholars might make educated arguments regarding the efficacy of their decision, the campus is soon to become just a bit more boring and filled with boxy buildings that have little if any connection to Kansas City.

The deets posted just a few moments ago from Historic KC:

September 24th will mark the end of the large stately carriage house that was built in 1912 by Walter S. Dickey. As the carriage house for what is now known as Scofield Hall, the stone building sits just off Rockhill Road on 51st Street. It was part of the 20 acre estate and served as a garage, power plant and caretaker's home. The stone for the carriage house was quarried on the site and the architect for the estate was Roger Gilman of Kansas City.

The historic structure is being demolished to create an enhanced driveway for a planned addition for the School of Computing and Engineering. #historickc #preservation

TKC, you should know that KC has a long tradition of tearing down some of their best buildings and most of the beatiful homes near campus. It's just part of KC sprawl. KU is doing the same thing near 39th street. Everything must go in order to make room for one of the last great American pyramid schemes: Higher education.

Thanks for the alert T. Took a computer class here long, long ago when UMKC was a much different place. It was a computer course where we had to schedule time on the machine during the day and compile code via punch cards. Fun times. Sad to see this building go, there are a lot of great people who have worked there over the years.

Can't they use it as a non-gender bath house ?

How about making it an Indian IT student safe house. It looks bulletproof.

Killa shitty all about getting rid of that horrible thing called the past, must’ve been a racism issue that’s tearing down more history that can’t be replaced.

We can we get rid of everything related to the black murderous peoples?

If the preservationists want to save it, let them raise funds and move it. Otherwise the property owner has the right to do with it what they will.

UMKC sucks. I hate to see it go but it is what it is, and the decision has been made. At least UMKC offers great degrees like studyies in urban queer culture and feminist activism. Go Roos.

It's not being torn down for a driveway. They have to demolish it to make for further expansion of Florsheim hall. Which houses some of the most prosperous degree programs on campus. Idiots.

You can't expect a University to know about historic preservation.

thanks for shining light on this.

umkc should preserve all the history it can in general.


UMKC is throwing away gold and picking up copper. Sad I guess some don't see it this way just like Lee's summit did with Cole Younger mother's house.

UMKC no respect for local history, not very smart are they?

Would anyone like to know how to find his home address in the state’s professional license registry?
Maybe go “do a ferguson” on him and his house?

Anybody have the ICU for the Keyboard Kommando at 3:49?
There's a group of us that would like to pay him a visit!
A "tough guy" like him needs admonishing.

UMKC probably doesn't teach history so consequently they know nothing about history.
Agree with @4:02.

Yup, prosperous for the Roo U! And, the students on their HB visas.

As a southern transplant in the KC area, I do think there’s very little interest or respect for history here and much of the midwest.

If once upon a time a black fella ate a ham sandwich in that building, it would be a protected building, likely a museum.

Except you're a dumbass.