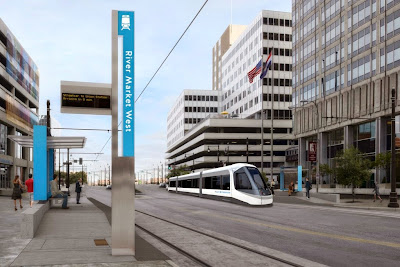 The KC Streetcar crew continues to tout their double-sided expansion efforts despite a lack of required federal funding.

The latest "news" on this topic is a proposed Northbound move to Berkley Riverfront Park in order to better service luxury condo and loft real estate speculation. Supporters tout their ability to chase TIGER grants despite a great deal of that funding has dried up and is out of favor with the current Prez Trump administration.

STREETCAR OPPONENTS CONTINUE THE FIGHT AGAINST THE TOY TRAIN AND HAVE BEEN GAINING TRACTION IN A LAWSUIT AGAINST EXPANSION!!!

Brief aside, while the streetcar touts "3-million riders" it's also important to know that passenger numbers on the current Downtown line have started to trend downward this year over last and before a cold spell has really taken hold in Kansas City.

From The Smart KC Crew: "Following the first TDD election, several KCMO voters have filed suit against the State of Missouri, Secretary of State, and all 50 streetcar extension petition sponsors.

"The suit was filed by Sherry DeJanes, local attorney and founder of Be SmartKC, alleging that the TDD voting process was too difficult and the eligible voters too targeted, that it “imposes onerous procedural requirements which handicap the exercise of their (Voters) franchise to vote.”

The TDD election is just one part of their complaint given the recent success of a tax fighter initiative to limit streetcar expansion without a CITYWIDE vote. And all of this signals that more court fighting is underway as the City Hall development agenda chugs along with a pace nearly as fast as the rising 2017 local murder count.

Actually, the streetcar might do well in a vote of the whole city.

I think people want streetcar service in more places, at least until the learn how much it costs.

It's a shame that the train doesn't go east at all and they just want to keep going north. If they want to provide more economic development, that's how they should do it. An east bound turn at the crossroads would be much wiser than killing traffic on Main ST.

That is all well and good. But it ain't gonna happen.

It's all about the airport MOU now.

Gotta get Burns & Mac back into the mix!

Those 25 million tourists need something to ride! God forbid they call an Uber and pay for their own transportation. And we know they don't want to get shot on the bus.

And this is the part where the folly trolley stalker throws a fit and spams his lame links to two bs blogs that nobody reads and don't have a readership of their own. You know, there is already an official source for streetcar spam. It's called The Kansas City Star.

LULZ. You just made me shit my pants on that. Nicely done sir.

You sound like the guy who I sat on the streetcar with going to the lady gaga concert. Why don't they ever clean the streetcar? It's filthy.

Tiger Grants from Trump? Good luck with that.

Liked the one about "alternative" funding.

Why don't they just charge a fare like the bus? Seems unfair that bus riders have to pay but streetcar passengers don't.

There's an official source for out-of-context hyped up bullshit too that's bought and paid for by out-of-town carpetbaggers. That's what I'm hearing.

A shuttle from Berkley Park to the river market and if there are enough ridership expand the street car to the park. .

10:30, there is no streetcar fare because they want to get the ridership numbers up. That way they can argue it's a popular means of transportation and try to expand it. They dare not charge a fare because the numbers would tank, and there goes the argument. All part of the con. If it were actually valuable to residents and tourists, they'd pay a fee to ride it.

Be sure and brush your teeth after that mouth job to Mayor Bullhorn. Use Steve Kraske's mouthwash; he services our clown of a mayor the same way every time he writes.:)

People in Kansas City overall know nothing about mass transit or rapid transit. The Streetcar might look new and shiny, but it is 1940 technology. It's not rapid transit, or lightrail, or a subway. It's fixed rail with overhead wires on city streets with cars, buses, pedestrians and bicyclists. By the time any zillion dollar streetcar extension is built on 2022, we will have autonomous shuttles moving people on the same route, without tearing up the streets for fixed rail, putting in overhead wires, or forcing delivery trucks on Main Street to fit inside white painted stripes on The Street. If we invest in rail, let's do it right with high speed rail transit to the airport, the stadiums, Lenexa business parks, and more.

Very nice, see you at the single terminal airport groundbreaking and the streetcar expansion groundbreaking. In the meantime enjoy the real KC Streetcar news that Tony and his followers enjoy reading as well:

Because after all, Tony is this guy: