TKC BREAKING AND EXCLUSIVE NEWS!!! JARDINE'S STAYS DARK FOR YET ANOTHER WEEKEND AS THE KANSAS CITY JAZZ CLUB'S BRAND NAME CONTINUES TO ERODE!!! 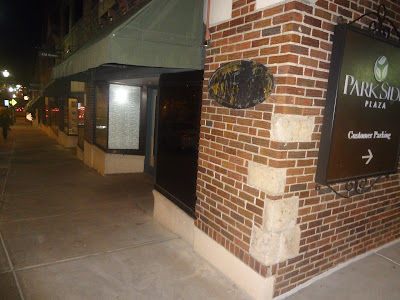 9PM on Saturday Night over the weekend . . . Nobody loves a basement blogger so I had nothing better to do than grab a photo of formerly beloved Kansas City Jazz Club closed and remaining silent.

THE JARDINE'S BRAND HAS BEEN ALL BUT DECIMATED BY THE RECENT CONTROVERSY AND CLEARLY THE KANSAS CITY JAZZ SCENE HAS LEARNED TO SURVIVE WITHOUT THE SO-CALLED "INSTITUTION" THAT HAS MOSTLY FADED OUT OF MEMORY!!!

It was a nice spot and a ton of talented local musicians played a lot of great shows there . . . BUT . . . Kansas City can only mourn for so long and the club's 15 minutes are up.

There was silly talk that Jardine's somehow "supported" musicians but all of those acts aren't starving on local streets . . . They've found other gigs. Jazz aficionados are now @ The Phoenix, The Majestic or maybe even listening to music that's even more relevant than the mostly old school offerings the old management preferred.

Kansas City Jazz is still evolving in a lot of ways like the stuff Mark Lowrey is doing with his jazz/piano/hip-hop fusion.

So when I think about all of the fun but pointless gossip about new owners buying whatever is left of a badly damaged brand, I realize . . .