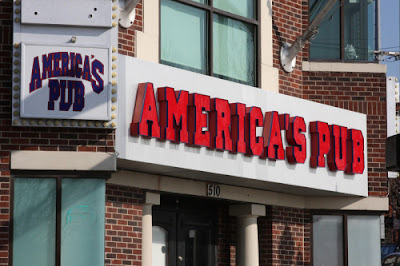 The Pitch laments that passing of an institution . . .

A great read: America's Pub is out of Westport

In so many words, they're really asking this question . . .

IS WESTPORT SAFE FOR WHITE PEOPLE NOW WITHOUT AMERICA'S PUB AND HIP-HOP MUSIC?!?!

The answer usually depends on how old or racist the respondent.

Still, the place was never that good even when it was a meat market for lower middle-class white people. Still, blaming hip-hop music for problems in a bar zone instead of booze, a lack of security or streetlights or just lame people in general is yet another sign that Kansas City's bar crowd deserve their mediocrity.
Posted by Tony at 1/11/2012 07:13:00 AM

Years ago Westport was a crowded, drunken place with a lack of streetlights and no security. Yet you hardly ever saw fights and it was as safe as the Plaza.

The thug culture be it from blacks or whites goes hand in hand with violence and crime.

Crime is driving out business from Kansas City.

Yet you hardly ever saw fights and it was as safe as the Plaza.

That's total bullshit. Westport has always been home to fights.

Rapes were rampant when white people hung out at the place.

Grow Up...The Gansta Nigga BS is what killed the club, and hurt the area. Christ, a white kid was killed across the street by a thug...cuz the kid "dissed his bitch." Nigga logic. Pure and simple.

That is fucking preposterous.

The premise, that the Hip/Hop/Holocaust does not represent a straight line reference to thuggery is laughable.

Jesus, half the fuckers singing (And I use the term "singing" loosley.), are busy killin each other off when they arn't in the studio shittin out more 3rd grade rhymes to match a 2 note metronome.

All that RAP shit and Hip/Hop/Hate is on display for the entire world to see.

By the way, here is your answer Tony.

YES! It WILL be a hell of a lot safer in Westport now that America's Pub is gone, and any one with the brains of a Blastocyst knows it.

The Westport customers know it.

The people who ran America's Pub know it.

The cops know it.

Anyone who has EVER been to Westport and been threatened, beaten, raped, insulted, itimidated and disgusted knows it.

Yes, its a lot safer.

The America's Pub location was a great live venue when it was Shadows.
If someone with $$$ was smart, they'd open a REALLY GOOD live jazz venue at that location.

I don't know a respectable person alive that will miss that place!!

Bring in a bar with a great, clean, respectable atmosphere there and there will be no problems at the bar!!

Yes there will always be fights at a bar district, but not the shootings that we saw that were ALL a result of America's Thug and Jacked up Grills!!

Anyone who questions whether AP brought a criminal element to Westport obviously never spent time there about midnight on a Saturday. Westport business owners have to be partying their asses off with this news.

All of the patrons will now be going to the Crossroads district. Balanca's is the hip-hop/thug destination now. Bet First Fridays is going to be a nightmare now.

I never heard of this place. Do they have a location in JoCo?

Where am I gonna rape some white bitches now?

Isn't it funny how you never hear from the ownership of this establishment but only their loudmouthed lawyer? That tells you one thing for sure, the owners don't live here. Out of town ownership = who gives a shit.

I know I will miss the pub. I worked there for a short time and had fun with the crowd and the employees. We had so few tavern disturbances that the Kansas City regulated industries said that the pub deserved a medal for the work that we did. We had fewer tavern disturbances than any of the other bars in Westport. If you were worried about the crime now you have to wonder where those "criminals" are going.