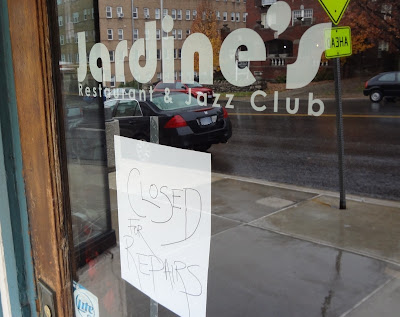 We blogged this late last night and we'll probably do even more promo for there hard-working locals put out of a job around X-mas time . . .

BUT THEY'RE PROMISING LIVELY STORIES AND GOOD TIMES IN SUPPORT OF THE JARDINE'S 15!!!

At least that's the selling point on facebook event page . . .

Last night . . . I this quote from THE FORMER JARDINE'S GM regarding a bit more motivational detail and a promise of good times and gossip . . . Here's the quote:

"If you have the time, please come down to The Point on Monday . . . This benefit/party will be a more personal way for all the former staff to get together and commiserate and swap stories. I hope people will throw them a little cash but just the public display of support will do them well."

It sounds like a fair trade and maybe a chance to tip people who served rather well . . . Once again, here's the detail from the group's facebook event page:

For the benefit of "The Jardine's 15", an informal but organized gathering will take place on December 12th, 2011, 7:00pm at "The Point" (our friends and an old Jazz friendly venue). Plans are being made for a live band (most likely a Jardine's staple), and tip jars will... be available to help the "15" and the band(s) recover lost wages.