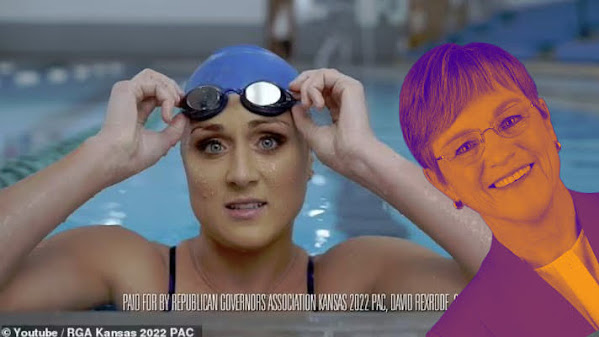 For those amongst our community of readers who don't watch Fox News all day and night . . . You probably only think Riley Gaines is an average college hottie and not the voice of a generation.

She's just a lady who was robbed in a college swim contest. The actual dollar value is about 12 bucks given that NOBODY but your loving relatives wants to watch college swimming.

Here's a political advert that preaches to the choir and sinks Kansas even deeper into culture war so that we can all forget pesky issues like healthcare, school test scores and sinking population in nearly every part of the state . . . Have fun with this one .  . .

Gaines claims Kelly's vetos show that the governor is not able to 'protect women' in her state.

Here's a direct link to the advert in question . . .