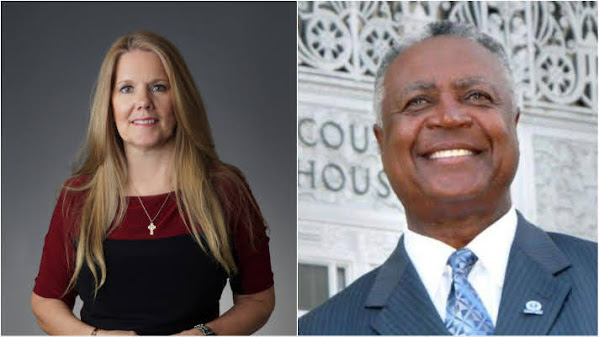 It's almost laughable that we're waiting for it. Because it's a forgone conclusion.

It is fated that SOMEBODY is going to allege racism in this contest in order to make voters forget about the property tax crisis of 2019 and promises to keep raising costs that will CERTAINLY force people out of their homes.

Close local news readers remember that Legislator Theresa Cass Galvin championed an effort to put the Andrew Jackson statues which adorn Jackson County courthouses up to a public vote and that effort was successful.

Already we've seen that TEAM FRANK knows this is their key to victory and they've started to mention the statues in their preliminary campaign lit and press releases.

In a recent statement chiding legislators for avoiding an abortion referendum, a statement from the exec noted the statue issue . . .

“It is unbelievable that the same people who voted to put the location of a statue on the ballot, refused today to give Jackson County voters a voice about their own bodies or those of their wives, mothers, sisters and daughters."

Here's where things get complicated . . .

In fact . . . She has a habit of flaring her eyes and raising her voice an octave or two when challenged.

Maybe her paid consultants will work on this personality tick

Maybe this contest will be fought by mail and a few commercials that most people will ignore.

Essentially the vote will come down to a demographic struggle . . . Like most contests in Kansas City.

Midtown & South Kansas City will provide the political battle ground for this contest.

WILL PROPERTY TAXES OR SOCIAL JUSTICE CONCERNS SWAY THE ELECTORATE IN THIS EPIC DOWN BALLOT FACE-OFF???

National politics will come into play . . .

If Republicans can effectively make their case about economic concerns and bring more voters to the polls . . . Then Legislator Galvin has a shot at an upset.

If TEAM FRANK can paint Legislator Galvin as a racist, an ideologue and strident GOP acolyte then she's unlikely to win over moderate Democrats who dominate KCMO.

It's doubtful that there will be much discussion about personal property taxes rising at an inordinate rate which will impact voters & residents more than any other issue.