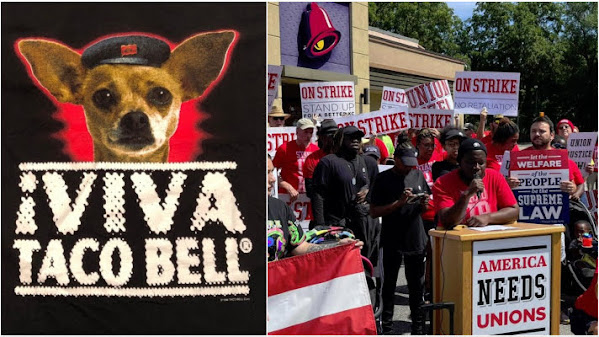 To wit and because TKC isn't scared to show his age . . .

The Taco Bell Chihuahua might have been the greatest marketing effort of the 1990s because it captured rising socialist & Antiestablishmentarianism sentiment with a sense of fun and blatant consumerism.

The adorable doggie was hard to debate. Moreover, the commercial campaign openly mocked consumers adopting values of an broken economic system that had been fundamentally defeated.

These were good times and long before the Chinese showed the world that communist/totalitarian ideology and a market economy were NOT mutually exclusive ideas. To be fair, any 90s era retail worker at The Gap could have told the world as much.

The mobile phone might have killed irony in much the same way that history no longer exists.

Here's a peek at the continued movement to organize fast food workers that might or might not chase away another local employer . . .

Stand Up KC, along with other union supporters, joined in on the protest Thursday.

The California Legislature recently passed a bill called the “Fast Recovery Act.” If signed by the governor, it would create a council to oversee fast food wages and working conditions.

These striking workers want a similar bill passed in Missouri.

“Not only are we calling on Gov. Newsom to sign that, we want Gov. Parsons to be paying attention,” said Terrence Wise, a Taco Bell employee and a member of Stand Up KC.

KANSAS CITY, Mo. - Workers at a Taco Bell location on Wornall Road went on strike Thursday. They posted a note saying they need a living wage, respect, safer working conditions and a union. Fran Marion has worked in the fast food industry for over 20 years.


Taco Bell staff walk out of Kansas City restaurant: 'We wanted to be treated like human beings'

Taco Bell employees at one Kansas City restaurant walked off the job Thursday to protest conditions at the store Shift leader Fran Marion, who has worked at the 8215 Wornall location for a year, says the group chose to strike just before Labor Day to call attention to abusive customers, short staffing, lack of paid sick days, disrespectful management and low wages.

Check video of the festivities . . .

The campaign hit its post-modern zenith with this promo for a creation that used a term otherwise ascribed to chubby young ladies: