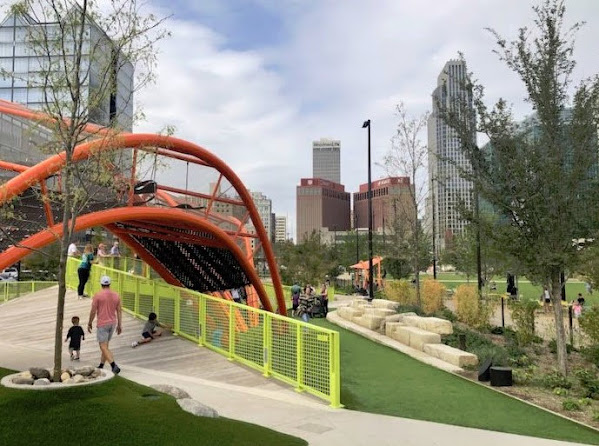 People who write about development for a living are either corrupt or stupid.

My guess is that most of the content is coming from these paid hacks is nothing more than dutiful paid transcription in order to keep their jobs. There are probably worse gigs.

Over the past 10 years we've seen & heard a lot of bad ideas about ideas for downtown but now we're coming full circle.

KCMO has ALWAYS suffered an inferiority complex and comparison with other towns have left us wanting.

Before the pandemic locals were told that we should aspire to the heights of Portland & Austin. Now that inflation and urban decay have turned hipsters away from that dream of food truck bliss, the ideas of developers are evolving.

Here's one example that provides a nice fantasy which ignores so many dangerous homeless dudes frightening the middle-class away from activities inside the loop so that junkie scamps can defecate in public and compete in death matches over love and tiny amounts of drugs . . . Check-it . . .

"With the streetcar coming to Berkley Park and the KC Current stadium going up next to it, this is the time to introduce the same kind of activities as Omaha is implementing to bring its parks alive and make them a destination.

"That’s why the idea of dropping tens of millions of dollars on creating yet another passive park on the old Buck O’Neil Bridge makes no sense.

"We have enough green space already downtown. What we need to do is to give people reasons to go there with fun programming and engaging attractions.

"Having our philanthropic community step up even somewhat closer to what their hyper-generous cousins north are doing for Omaha would be hugely helpful. The city and the Parks Department have few resources to activate our parks."