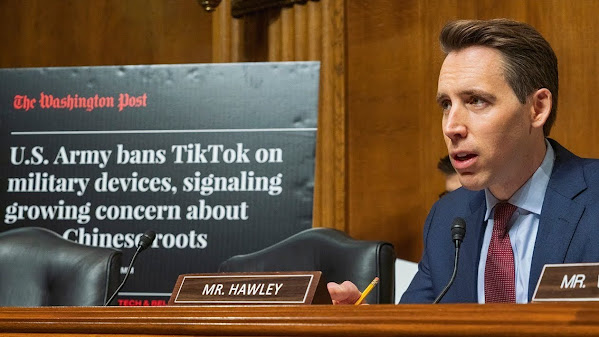 The Missouri firebrand politico makes a decent point about a social media app that will be lost or ignored by the vast majority of people who used it.

For every nasty comment we notice about TikTok on boomer social media Facebook . . . There's a youngster relative who absolutely doesn't care and continues to hide their face whilst gazing into their phone.


TikTok's parent company, ByteDance, is based in China, a relationship that has become the subject of intense scrutiny from lawmakers as the U.S. assesses its relationship with the Chinese government. TikTok's chief operating officer, Vanessa Pappas, was grilled by senators on Capitol Hill last week at a hearing with leaders from several major social media companies.

"This shocking testimony calls for action," Hawley wrote in his letter, asking Yellen "to exercise your responsibilities as [chair of the Committee on Foreign Investment in the United States] to ensure that the Chinese company ByteDance fully divests TikTok and that TikTok sever any connections with any other Chinese company."

Sen. Josh Hawley, R-Mo., wrote Monday asking Treasury Secretary Janet Yellen to "ensure" that the social media giant TikTok fully cuts it ties with China. TikTok's parent company, ByteDance, is based in China, a relationship that has become the subject of intense scrutiny from lawmakers as the U.S.