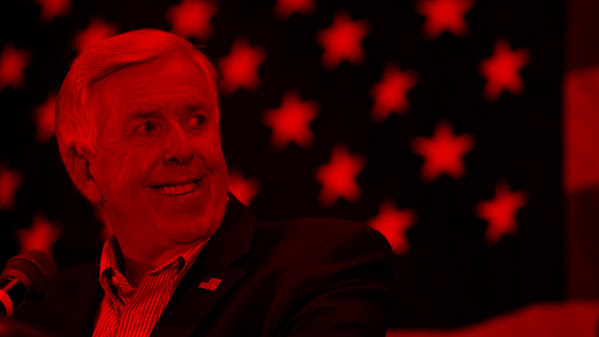 The Missouri GOP is at war with itself on fiscal issues . . . Our extreme right-wing MAGA friends mistakenly think that backward rural politics should rule the state's agenda. The elite in STL want to keep their big money connections whilst the "good old boy" contingent of the party just wants to make sure there's enough padding to keep connected families in good stead.

Progressives despise tax cuts on general principle and because they don't want to understand how supply side economics works because it risks exposing their groundless worldview.

And all of these challenges might only serve to embarrass the guv and turn him into a punching bag.

This screed mostly explains the Democratic Party side of the equation BUT we found this line useful and deserving of consideration given that NOBODY is happy with Missouri roads and so many other flailing functions of Missouri government . . .

"But here’s the problem for Missouri: We’re the fiscal equivalent of half-pregnant. Because the state has no plan or direction, poor services are all it has to show for its low-tax status."

Missouri is like a family in which everyone has agreed that a vacation is sorely needed. All the schedules have been coordinated. Everyone has arranged to be gone. The packing is done. The car is loaded. But they forgot to pick a destination.