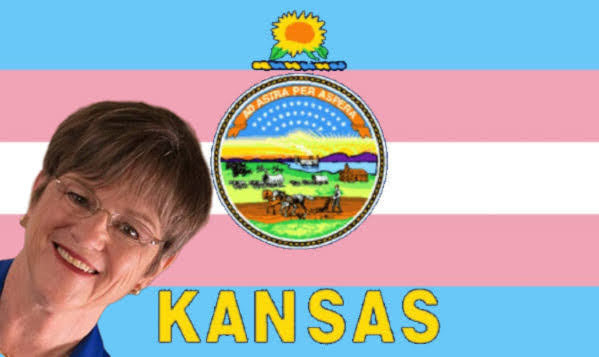 The answer is confusing and hinges on nuance that most voters wont' bother to understand . . .

How are trans people defined . . . Or how are genders defined at all???

TKC Caveat . . . What our conservative friends always miss in this conversation is that the debate needs to be approached compassionately given that we're talking about student youngsters and how to protect the safety and well-being of ALL OF THEM.

Check this recent explainer put on blast across the mainstream news and notice the highlighted keyword "subset" which allows a great deal of rhetorical liberty . . .

“You may have seen my opponent’s attacks,” she (Governor Kelly) said in the ad. “So let me just say it: of course men should not play girls’ sports. OK, we all agree there.”

The rest of the ad calls out her opponent, Kansas Attorney General Derek Schmidt (R), for his support of cutting school funding.

Her statement is true: these laws are not about stopping boys or men from playing girls’ or women’s sports, they’re about banning a subset of girls and women – those who are transgender – from participating in school sports. Like most mainstream Democrats, Kelly is in favor of transgender people getting access to full educations – sports education included – but isn’t in favor of removing gender distinctions in schools.

The Republican Governor's Association (RGA) is saying Kansas Gov. Laura Kelly (D) is lying about her record on transgender rights as she faces attack ads from the conservative organization over her two vetoes of transgender sports bans. In 2021 and this past April, Kelly vetoed bills that would have banned transgender girls from participating in school sports as their gender.