THE NEXT KCPD TOP COP PROBABLY WON'T BE HIRED UNTIL AFTER THE 2023 ELECTION GIVEN THAT THE PROCESS HAS BECOME EXCEPTIONALLY POLITICIZED!!!

There's enough blame to go around for EVERYBODY.

Mayor Q is Kansas City's LOCAL & ELECTED REPRESENTATION on the police board and he doesn't really seem to be in a hurry to make a decision given his recent tweet on the topic. 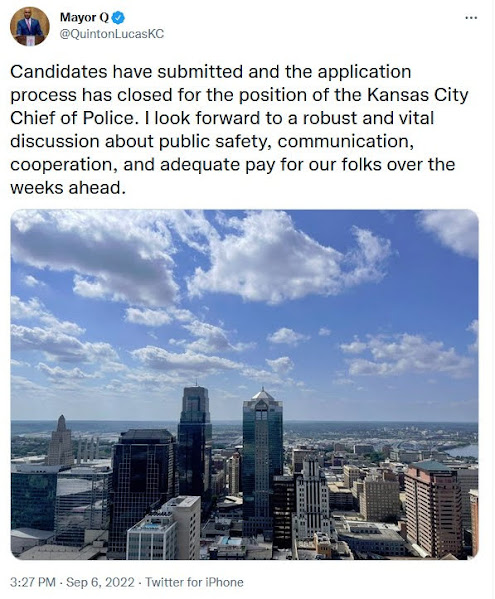 Does that seem like someone who is eager to work with law enforcement on curbing deadly & rising local crime???

In the meantime there's no reason to expect that the current homicide count trajectory won't continue with very little interest from our elected leaders about working to implement new strategies in order to try and reduce the carnage on local streets.

It seems the Kansas City Police Department hiring crisis is hitting every strata of the organization.