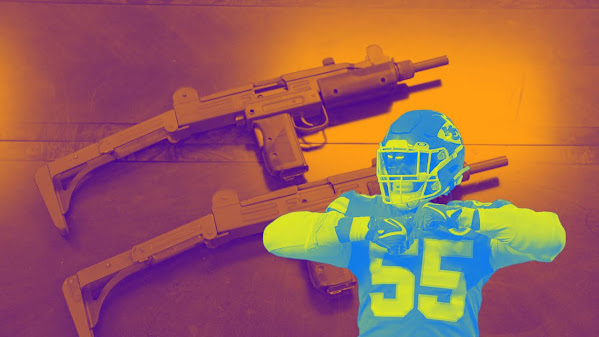 One of the best defensive players in the NFL has earned the quiet support of the Chiefs' front office AND local media.

NOTICE SILENCE ABOUT FRANK CLARK'S GUN DEAL AND THE DEARTH OF ANY DISCIPLINARY ACTION FROM THE TEAM DESPITE SO MANY ANTI-GUN ADVOCATES IN KANSAS CITY POLITICS!!!

MAYOR Q REGULARLY WEIGHS IN ON GUN CRIME ACROSS THE NATION BUT HE HASN'T OFFERED A PEEP ABOUT THIS WRIST SLAP GUN CHARGE ON A HOMETOWN FAVORITE!!!

Don't worry, there aren't any wordy editorials forthcoming . . . Except maybe to exonerate the baller.

Our political leaders prove impotent to offer even a tweet or insight into this gun plea deal despite the local connection to a high profile star and their longstanding commitment against firearms.

Even ESPN merely offers a terse report that mostly focuses on the implication that the team will politely ignore the court decision.

Meanwhile, the plebs might look closely and notice that anti-gun talk from so many progressive leaders is mostly for show or doesn't apply to anybody with more leverage, political capital or connections.

To be fair, there are many locals who don't believe Mr. Clark did anything wrong and their pro-gun opinions have actually proved insightful . . . At least they spoke up.

The silence of local anti-gun advocates is deafening.

Coach Andy Reid said Clark would play against the Cardinals "unless there's a setback.''

Clark pleaded no contest in Los Angeles on Thursday to two counts of misdemeanor possession of an assault weapon stemming from a pair of 2021 incidents. He was sentenced to one year of probation and 40 hours of community service.

The Kansas City Chiefs expect Frank Clark to play in Sunday's game at the Arizona Cardinals after their veteran defensive end faced the resolution of some long-standing legal issues this week and missed a day of practice because of an unspecified illness.

This week marked the start of school for Uvalde, Texas, students - their first time stepping inside a school since a mass shooting there killed 19 elementary school students and two teachers. Meanwhile, here at home, school safety is on our students' minds, perhaps more than we realize.


Let's Argue: Frank Clark will have 3 sacks on Sunday

Let's Argue is a weekly series that looks at hot takes, unpopular opinions, wacky predictions and more from fans. First of all: let's hope that Clark gets well soon. The defensive end missed Thursday's practice due to an illness.