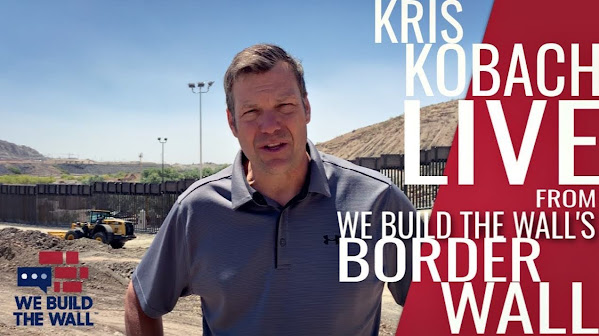 Most people knew this project was "sus" as the 30-year-olds on TikTok say when they pretend to be young.

Here are the basics from a local blog and a reminder that most border watch groups will only end in hurt feelings and possibly somebody going to jail . . .

Kris Kobach, the Republican candidate for Kansas attorney general, remains on We Build the Wall’s board of directors. He explained his continuing connection as necessary to wind down an organization that once boasted millions in contributions.

“Now you have to do an orderly shutdown of the corporation and there has to be some attorney involved to actually make it happen,” Kobach told reporters Thursday night after a Kansas Chamber of Commerce event in Olathe.

Kobach’s comments came after The Washington Post and other news outlets reported that Bannon is expected to surrender to authorities to New York prosecutors on Thursday to face an indictment that remains sealed.

Top former Trump strategist Steve Bannon is expected to surrender to New York authorities on Thursday to face state fraud charges surrounding his role in a fundraising effort to privately underwrite the construction of the US-Mexico border wall, according to sources familiar with the matter.

Kansas ex-sec. of state resigns from 'We Build the Wall'

The Republican candidate for Kansas attorney general resigned Friday from the board of directors of a nonprofit group that has been accused of defrauding people who believed they were donating to help build a wall on the U.S. southern border.Kris Kobach resigned from the board of directors and as general counsel of WeBuildTheWall, Inc., The Kansas City Star reported.