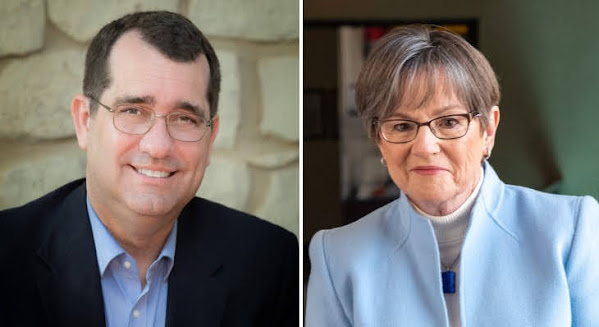 Right now we take a quick peek at local Democracy and a contest that is closer than anyone wants to admit because the candidates have to balance "being nice" with talk about red meat issues.

An overview and realization that more people are interested in assorted meats on a stick . . .

"Schmidt’s television ads seek to tie Kelly to Biden, blame them both for inflation and portray the two Democrats as big-spending liberals, and he continued that throughout the State Fair debate before its raucous crowd, drawing chants from Kelly supporters of “Schmidt's unfit!” and “Bull-Schmidt!” The fair debate is a tradition for governor's and U.S. Senate races, and organizers encourage partisans to chant, shout and wave signs as other fairgoers take in exhibitions, ride Midway attractions and sample cuisine such as “moink,” meatballs wrapped in bacon on a stick."

HUTCHINSON - Dennis Pyle took a front row seat to the Kansas State Fair debate between gubernatorial candidates - over objections from supporters of Republican nominee Derek Schmidt. Pyle, who is running for governor as an independent, wasn't allowed to participate in the debate, even though his name will appear on the ballot in November.

HUTCHINSON, Kan. (AP) - Democratic Gov. Laura Kelly and Republican nominee Derek Schmidt, the current Kansas Attorney General, squared off Saturday in their first debate in the race for Kansas governor.Abortion access was among the wide range of topics covered. Schmidt, a three-term Kansas attorney general, said during the debate at the Kansas State Fair that he respects the Aug.