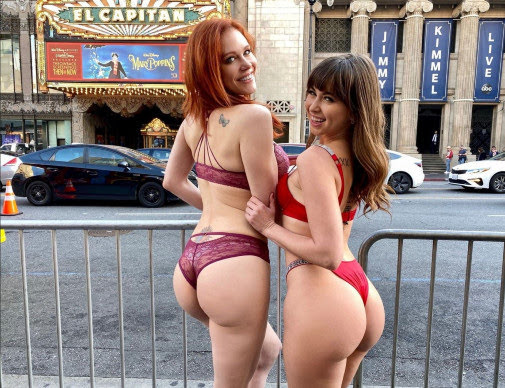 This pair of OnlyFans creators inspire us to take a peek at pop culture, community news and top headlines.

KC Pet Project hosted a Labor Day adoption special from Friday to Monday over the holiday weekend.Pets for $25.The special was a rousing success. But at least one family found their perfect pet."She was the one that caught my eye," New dog owner Lavera Brown said. It's adoption day.

An unrestrained passenger, who was making a sandwich in the back of a minivan, was critically injured when the vehicle she was in rear ended a truck hauling dirt during a collision in south Kansas City, a police spokeswoman said. The crash occurred shortly before 8 a.m.

Planners gave the green light for Kansas City to abandon an alley right-of-way that runs through a block that philanthropist Shirley Helzberg is eyeing for redevelopment, with historic preservation and new-build components. The Kansas City Plan Commission on Tuesday recommended that the city give up the 167-foot-long asphalt alleyway between 17th and 18th streets, in the block bounded west to east by Central and Wyandotte streets.

KANSAS CITY, Mo. - The Missouri Department of Transportation will close all lanes of westbound Interstate 470 at Interstate 435 on Wednesday for urgent bridge repairs. MoDOT said the closure will run from 9 a.m. to 5 p.m. Monday to allow for bridge joint expansion repairs along I-435 over the Blue River.


Prez Biden Claps Back At Critic

Biden responds to heckler at speech: 'Everybody's entitled to be an idiot'

President Biden responded to a heckler while delivering remarks in Milwaukee on Monday, saying, "Everybody's entitled to be an idiot." Biden traveled to Wisconsin on Labor Day to deliver a speech at Milwaukee Laborfest, where he spoke about his support for unions and lauded Democratic legislative victories such as last year's coronavirus relief package and...

The Pentagon on Tuesday said it will launch another unarmed Minuteman III intercontinental ballistic missile test in California this week less than one month after its last test. Air Force Brig. Gen. Pat Ryder told reporters from the Pentagon that the test will be held early Wednesday morning from the Vandenberg Space Force Base in California, some 60 miles north of Santa Barbara.

Former Attorney General William Barr on Tuesday said the decision by a Florida judge to grant former President Donald Trump's request for a special master to review the documents seized by the FBI from Mar-a-Lago is "deeply flawed" and urged the Justice Department to appeal it.

In Wisconsin, one of the nation's key swing states, cameras and plexiglass now fortify the reception area of a county election office in Madison, the capital, after a man wearing camouflage and a mask tried to open locked doors during an election in April.

Why did Donald Trump block the Obamas' portraits and why was the decision so controversial?

Portraits of Barack Obama, the 44th president of the United States, and first lady Michelle Obama will finally be unveiled at the White House on Wednesday after their presentation was blocked by his successor in the Oval Office, Donald Trump.

Weaker Republican opponents in some states have also played a role: In Arizona, GOP nominee Blake Masters' struggles since winning the primary last month have moved the state from "Toss Up" to "Lean Democratic" - a reflection of Democratic Sen. Mark Kelly's growing lead over Masters.

Wells Fargo has inexplicably terminated the bank accounts of several high-profile individuals in the sex industry - one of whom took to Twitter and slammed the bank for the move.

Justin Bieber has been forced to suspend the rest of his world tour after suffering a health setback. The 28-year-old pop star announced in a Tuesday post on his Instagram story that he has dealt with exhaustion while trying to get back on tour, and that the effort "took a real toll on me."

Suicide is a leading cause of death among children and adults. Here are the signs someone's at risk

Suicide is a leading cause of death among children and adults, but spotting risk factors and warning signs isn't easy.It's National Suicide Prevention Week Sept. 4 through Sept. 10, part of Suicide Prevention Awareness Month. Nearly 46,000 people in the United States died by suicide in 2020, which is about one death every 11 minutes, according to the U.S.

The forgotten legacy of Muriel Kauffman's dedication to the arts, sports, and KC's sprawling foundation

Kauffman Center for the Performing Arts. The Kauffman name resides in multiple places across the KC Metro. Nearly everyone recognizes Ewing Kauffman as the owner of the Kansas City Royals baseball team, but many Kansas Citians don't know of the story of his wife, Muriel.

Former Royals pitcher Mark Littell dies at the age of 69

The Royals, and the baseball world, lost one of the great ones on Monday. Mark Littell, who pitched for the Royals from 1973 to 1977 and for the St. Louis Cardinals from 1978 to 1982, passed away from complications of heart surgery at the age of 69.

Iced Horchata Latte from Anchor Island Coffee. // Photo by Steph Castor Located in Midtown at 41st and Troost, this LGBTQ+ couple-owned coffee shop boasts an extensive menu of adventurous drinks, including the unroasted Green Espresso Latte, Taro Latte, and Dirty Sunrise (with espresso instead of tequila).

My good friend Brad Finch has a new line of work that helps people maintain the appearance of their ancestors' graves. He, with the most modern methods, cleans tombstones. He let me watch in Elmwood Cemetery as two stones belonging to veterans of the First World War were restored to near perfect condition.

Early Wednesday fog the only hitch in a sunny week