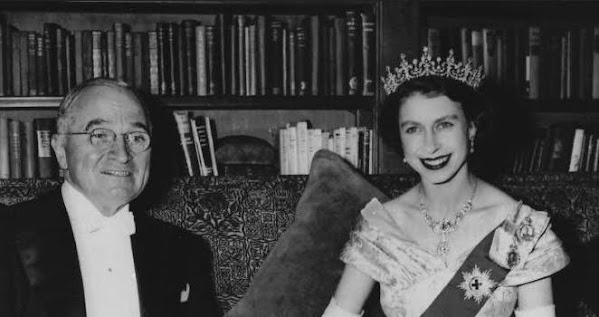 We put off blogging this tidbit because it doesn't really matter much to our local lives BUT this blog was hatched to swagger jack the ethos of the Brit tabloids and so it's right that we pay a bit of tribute.

Credit to THE BEST & BRIGHTEST amongst our blog community for making this connection and showing fmr. meth town Prez Harry looking exceptionally awkward next to the monarch back when she was only a princess in her heyday. 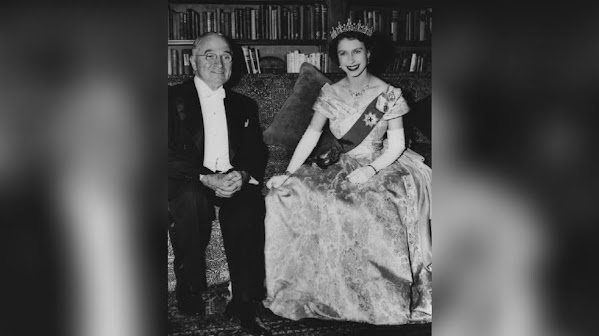 And that brings us to check pop culture, community news and pop culture tonight.

Queen Elizabeth II, Britain's longest-reigning monarch, died Thursday after 70 years on the throne. She was 96.

KANSAS CITY, Mo. - Anne Bertolde opened her mailbox and, as usual, it was empty. "It started where the mail would get delivered at 8 o'clock at night, and then it progressed to where we were getting mail maybe three days a week, and then it went down to two days a week," said Bertolde, who teaches high school in Liberty.

KANSAS CITY, Mo. - The University of Central Missouri announced Wednesday changes to its Red and Black Scholarship program to place less of an emphasis on standardized test scores. The changes are set to take effect with the 2023-24 school year.

Starlight to host free showing of 'The Lion King'

KANSAS CITY, Mo. - The Lion King heads back onto the big screen Saturday, Sept. 10, and fans can watch it for free. Starlight plans to open its gates for a free community movie night. The special event is possible through a partnership with Community Builders of Kansas City.


Betting On Vice Paying Off For Sunflower State

Kansas Lottery says sports wagering so far has been a success

KANSAS CITY, Kan. - Sports wagering in the state of Kansas is in its full operational phase following a soft launch on Sept. 1 . Kansas Lottery, who is in charge of wagering operations, says players won't notice a difference between the two phases.

Opinion writers from The New York Times, Atlantic and New York Magazine openly celebrated the death of Queen Elizabeth on Thursday Tirhakah Love, senior newsletter writer for New York Magazine since December, devoted his evening update, Dinner Party, to the death of the queen Love celebrated her death, describing someone who has been 'sucking up the Earth's resources' for 96 years 'I'm supposed to be quiet or, better yet, actually mourn what was a barely breathing Glad ForceFlex trash bag?

The Department of Homeland Security on Thursday finalized a regulation rolling back a policy instituted under former President Donald Trump that sought to limit immigration benefits for those likely to rely on government aid.

A Las Vegas public official has been arrested in connection with the killing of an investigative journalist, his newspaper says

A local official in Las Vegas was arrested Wednesday in connection to the killing of a veteran journalist who had been reporting on the official's purported wrongdoing, his newspaper says.

Lucy Pinder issued a cheeky order for all the fellas out there who might be struggling with their business in the bedroom. The stunning ex-glamour model, 38, took to Twitter last Wednesday (April 13) to share a recent sex study cited in The Independent relating to premature ejaculation.

The kick-off of the Chiefs season in a big game against the Cardinals, one of the city's largest arts festivals and one of country music's biggest stars at the T-Mobile Center make for a big fall weekend. (Oh, and there are gyros, too.)

Summer weather is still alive in Kansas City for at least a couple more days. Clear skies overnight and temps back again into the lower 60s. Conditions are mostly sunny and warmer on Friday, getting close to 90.Increasing clouds on Saturday, though not quite as warm. Most of the day is dry.