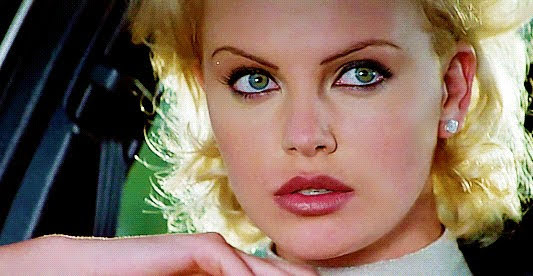 I never understood 2 Days In The Valley. There wasn't any real story and the whole thing seemed like nothing more than a Pulp Fiction rip-off without the witty dialogue . . . Funny, because most Tarantino movies are lovingly crafted outright postmodern rip-offs.

What I did understand was hottie Charlize might have been one of the most beautiful movie stars I'd ever seen in my life.

Nowadays her career seems to be fading by her own admission but her acting chops remain solid because she garnered a few worthwhile movies amid a bevy of garbage before the current epoch wherein the studios have given up on plot/story/cinema altogether and just started making super hero junk.

And all of THAT inspires this collection of pop culture, community news and top headlines.

KANSAS CITY, Kan. - The KSHB 41 I-Team is diving into the training process and requirements for fire truck drivers. It's been nine months since the deadly Westport crash . Three people died after a KCFD pumper truck and SUV collided in December.

PLEASANT HILL, Mo. - Neighbors complain dozens of dogs are living on a Cass County property that resembles a junkyard outside Pleasant Hill, Missouri. Those neighbors say they are concerned for the dogs' health and for the people who use the trail every day that goes right by the trash-filled property.

Kathleen VonAchen, Wyandotte County's chief financial officer, felt like she had a good relationship with Mayor Tyrone Garner during the first few months of his administration. They met twice after Garner was elected in November to discuss the county's financial outlook.

Chiefs already checking in on Willie Gay Jr. as he serves suspension

On Monday, the NFL handed down a four-week suspension to Kansas City Chiefs linebacker Willie Gay Jr. These sorts of suspensions rarely come as a surprise to either the team or player. Generally, the NFL will give both parties a heads-up that something like this could be coming.

For the past 10 years, craft beer breweries have popped up all over the country, and some Midwest farmers are responding to the local craft beer craze by growing their own hops. In the U.S. nearly all hop production takes place in the Pacific Northwest, with 70-75% of the crop grown in Yakima, Washington where it's often irrigated.

Charlize Theron: 'I have never been at a Kim Kardashian level' of fame

Charlize Theron has got real about her fame as she claims that she has never even hit Kim Kardashian's level in a candid interview. The 47-year-old Oscar-winner touched on several subjects including her current star power as she is featured on the cover of The Process Issue of Harper's Bazaar.

South Korean President Yoon Suk-yeol went viral for his hot mic reaction to President Biden's remarks at the United Nations General Assembly Wednesday. Yoon, who took office in May, reacted to Biden's pledge to increase the U.S. contribution to the U.N. Global Fund, which would require congressional approval.

Video Breaking down the latest developments in the Trump investigations

A new lawsuit alleges Donald Trump committed fraud by falsely inflating his net worth, and the Trump legal team has reversed its request for a special master to review documents taken from Mar-a-Lago.

Ukraine's Zelenskyy lays out his case against Russia to UN

UNITED NATIONS (AP) - Ukraine's president laid out a detailed case against Russia's invasion at the United Nations and demanded punishment from world leaders in a speech delivered just hours after Moscow made an extraordinary announcement that it would mobilize some reservists for the war effort.

House Democrats were forced to delay the debate over four policing and public safety bills that were set to come to the floor on Thursday because of opposition from a coalition of progressive Democrats. Members of the far-left "squad" voiced opposition to the lack of "accountability measures" in one of the four bills up for...

Most Republicans Support Declaring the United States a Christian Nation

Our national poll included 2,091 participants, carried out May 6-16, 2022, with a margin of error of +/- 2.14 percent. We started by asking participants if they believed the Constitution would even allow the United States government to declare the U.S. a "Christian Nation."

Passenger sucker-punches attendant from behind on flight to California, video shows

An unruly passenger on an California-bound American Airlines flight punched an attendant in the head from behind, video shows. Other passengers helped detain the man, who was arrested on landing at Los Angeles International Airport, KABC reported. The incident took place Wednesday, Sept.

French President Emmanuel Macron warned of a global "crisis of democracies" following years of "pressure" and "destabilization" efforts in an exclusive US interview with CNN's Jake Tapper.

More than 1,300 people were detained across Russia on Wednesday for participating in nationwide anti-war protests -- with some directly conscripted into the military, according to a monitoring group, after leader Vladimir Putin announced a "partial mobilization" of citizens for his faltering invasion of Ukraine.

It's all love between Adam Levine and wife Behati Prinsloo - or is it? The couple put on a united front Wednesday amid the Maroon 5 frontman's flirty texting scandal, stepping out in Santa Barbara with one of their two daughters, 5-year-old Dusty Rose.

Last week, the Food and Drug Administration issued a warning: Don't cook your chicken in NyQuil. This needed to be said, according to the FDA, because of a "recent social media video challenge," presumably linked to TikTok.

Inside David McCullough's Relationship with the Truman Library

In 2007 the Harry S. Truman Presidential Library and Museum in Independence observed its 50th anniversary. To celebrate, library leaders invited author David McCullough to speak. McCullough published a biography of Harry Truman in 1992. It spent 43 weeks on the New York Times bestseller list, received a Pulitzer Prize and sold more than a million copies.


Round World For Tortilla Lady

KANSAS CITY, Mo. - In an industrial facility just off Southwest Trafficway, Marissa Tapia Gancarelli and her predominately female team create aromas in the kitchen to rival those in Mexico. Tapia Gancarelli is the co-owner and founder of Yoli Tortilleria, which started as a passion project about five years ago.

Paula Poundstone. // Photo by Shannon Greer Comedian Paula Poundstone is one helluva Chatty Cathy. During our 20-minute convo, she went off on so many random tangents we thought she was back in geometry class. For instance, when asked about her thoughts on Kansas City, she toggled between stories of sweet potato 'Bama pies she smuggled on her plane ride...

Lyric Opera of Kansas City Presents Even after a century and a half, Carmen is still that femme fatale. The popular opera tells the story of an ill-fated romance, touching on themes of jealousy, obsession and bullfighting. Performed in the original French with English subtitles. September 24-30, 7:30 pm.

Cooler temperatures to kick off fall

Billboard #14 for 1982 Toto - Rosanna has a great deal of history behind it and right now serves as the #TBT song of the day and this is the OPEN THREAD for right now.