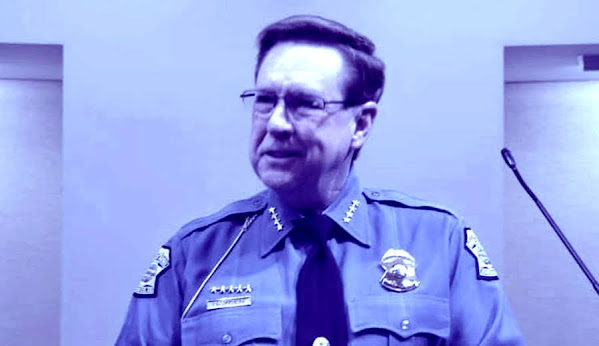 Kansas City Star Vs. Johnson County Sheriff Hayden: The Political Slap Fight That Nobody Cares About

Twitter wanted to make sure that we saw this . . . But we noticed that no other local news org picked it up and the topic didn't really serve as anything else but partisan fodder.

In short . . . Until something actually happens . . . This story DOESN'T REALLY MATTER for most locals who want to spend their lives doing something other than writing mean stuff on the Internets.

Here's the premise that's followed-up by a bloviating editorial that most didn't bother to read . . .

The Republican sheriff appeared to acknowledge he doesn’t have probable cause, the legal standard required to seek a search or arrest warrant, after the investigation helped foster baseless suspicions of voter fraud. He also said he launched the inquiry to force the preservation of 2020 election records. The comments came during a nearly two-hour meeting inside a Johnson County Sheriff’s Office facility. Video of the meeting, which took place Aug. 30, was posted on Friday on Rumble, a video sharing platform popular among the right-wing politicians and supporters. Hayden’s remarks offer additional insight into an investigation that hasn’t led to any charges or arrests but has helped build his profile among election deniers.

“Well, here’s the problem. If China is the bad guy, I’ve got a problem. I can’t put cuffs on those guys. A lot of them,” Hayden said. “So we’ve got to find somebody that had an idea of what they’re doing and honest to God, I don’t think any of our election helpers, I’m not sure even our election folks who are putting it on, have any idea of what’s going on. I don’t really think they do,” Hayden said.

'We've got to find somebody': JoCo sheriff appears to lack probable cause in election inquiry

Johnson County Sheriff Calvin Hayden, who has spent months promoting a criminal investigation into elections, told a gathering of residents last week that "we've got to find somebody" who knows election rigging is happening.

OPINION AND COMMENTARY Johnson County Sheriff Calvin Hayden is scheduled to meet next week with county commissioners to discuss ongoing budget and staffing struggles in his department. "We cannot hire deputies fast enough," Hayden told commissioners earlier this year. Officers are quitting because salaries are too low, he said: Cities pay more, with easier work conditions.