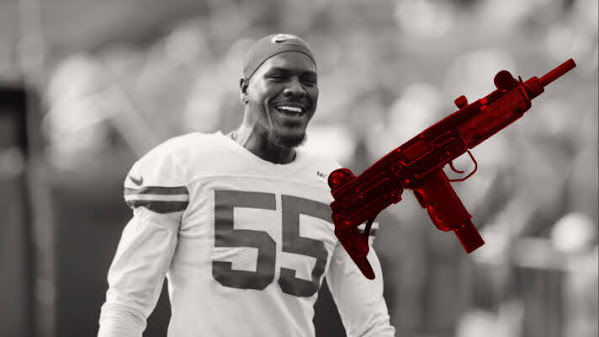 Amid an obvious bit of hypocrisy that our blog community called out last week.

Here's the tepid response from the newspaper that at least remains consistent and completely silly . . .

"As part of Clark’s recent no-contest plea to two counts of misdemeanor possession of an assault weapon, the Chiefs player must commit to 40 hours of community service during the year of unsupervised probation he was sentenced to. Clark should use that required time to get in front of as many at-risk youths as possible. Sure, free football camps are a promising start, but we have a gun violence issue in Kansas City that must be addressed. And Clark could help by taking some sort of public stance against violent crime."

"American gun laws are a bad joke and enforced unevenly and often politically depending on the political climate of various regions . . . That's why I'm kicking ass for the Chiefs this season!!!"

Actually . . . A bit of personal truth might be inspiring.

Chiefs' Frank Clark says he's a new man after giving up booze. How about the guns, too?

OPINION AND COMMENTARY Editorials and other Opinion content offer perspectives on issues important to our community and are independent from the work of our newsroom reporters. I want to believe Frank Clark when the Kansas City Chiefs' mercurial Pro Bowl defensive end says he has a new outlook on life.