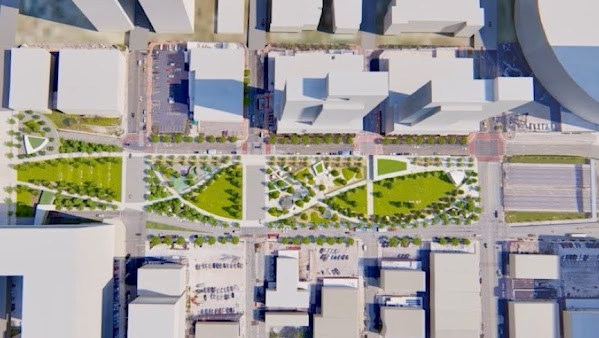 It's not going to happen.

And the scheme is disheartening when coming from adults who are supposed to have real jobs.

To "build excitement" and then hope against hope for some of Prez Biden's free money.

The only problem is that the plan is dubious at best.

As things stand now . . . Building more "green space" near downtown Kansas City would not only create a hazard for drivers underneath but also offer the burgeoning homeless population in the loop even more camping grounds.

"The public development agency has issued a request for qualifications (RFQ) to hire a firm to perform an environmental assessment for the estimated $160 million plan. The goal is for all or at least a segment of the park deck to be completed by 2026."

Translation . . . Somebody's cousin is going to get a nice contract to come up with drawings and more press releases.

Again, lets look at the inspiration for this hot mess . . .

"A verbal commitment from funders and local property owners — including Lowes’ Hotel & Co. — who will finance the engineering and design phase of the project, which looks to put a lid over the 5.5 acre stretch of I-670 from Wyandotte Street to Grand Boulevard."

All of these phrases are signs that it's time to start panicking or, at least, realize that we live in a vast universe full of infinite possibilities that mostly exist to separate fools from their money.

If realized, the project could boast such amenities as playgrounds, dog parks, and arts and amphitheater programming. The design process is expected to last between 12 and 18 months. State and federal partners have shown strong interest in funding construction.