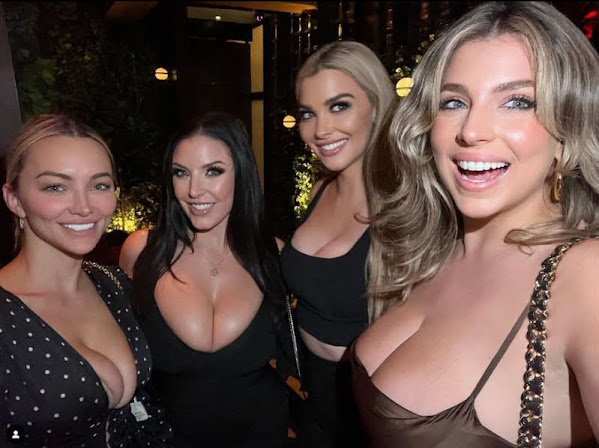 Right now we take a peek at hottie Angela & Lindsey with their gal pals sharing a good time shot. And this inspires our glimpse at pop culture, community news and top headlines.

Kansas City needs to become more walkable. Here's how that can happen

As City Council adopts policies to make walking safer, officials will need to craft one unified vision on what equitable walkability will look like in the future. .

KANSAS CITY, Mo. - 1 person died and 4 others suffered serious injuries in a crash Saturday night in KCMO. The crash happened at 7:15 p.m. just off eastbound Interstate 70 on the exit ramp to U.S. 40 Highway. No word on what led to the crash.

Five weeks after KMBC 9 Investigates first reported about a property with multiple complaints about dogs, debris, and trash near a popular state trail, Cass County officials started working on visible solution Thursday.Workers cleared much of the debris and trash from the public right-of-way along South Roush Road near the Intersection of East State Route P and the Rock Island Spur of the Katy Trail.However, the dogs remaining on the one-acre plot continue to concern Cass County residents like Michelle Brinkoetter."I'm so grateful that we've got this start," she said Thursday.


Coping With Rock Chalk Opt Out

Kansas Reflector welcomes opinion pieces from writers who share our goal of widening the conversation about how public policies affect the day-to-day lives of people throughout our state. Eric Thomas directs the Kansas Scholastic Press Association and teaches visual journalism and photojournalism at the University of Kansas.

No joke: Man who dressed up as Batman villain learns lesson

CLAYTON, Mo. - A convicted felon in Missouri accused of livestreaming threats to bomb and kill people while he was dressed up as the Batman villain known as The Joker was sentenced Friday to 60 days in jail, with credit for several months served after his arrest.

IN some ways, having big breasts can be a major - ahem - asset. But Lindsey Pelas tells The Sun there are also drawbacks, including double standards on social media, shopping struggles, and the fact that "no one has sympathy for someone who's a size zero with DDD t**s."

President Biden warned Russian President Vladimir Putin not to use chemical or tactical nuclear weapons in the war against Ukraine or there would be a "consequential" response from the United States. The big picture: The Kremlin last week said that Russia would continue to wage its war in Ukraine until all its military goals have been achieved despite facing a rapidly advancing Ukrainian counter-offensive.

KYIV, Sept 16 (Reuters) - President Volodymyr Zelenskiy accused Russia on Friday of committing war crimes in Ukraine's northeast and said it was too early to say the tide of the war was turning despite rapid territorial gains by his forces this month.

Every Emotional Photo of the Queen's Children Guarding Her Coffin

The four marched into the hall in their military garb, as members of the public who were there to pay respects to the Queen paused. King Charles stood in front of a cross, bowing his head for the 15-minute ceremony. Princess Anne closed her eyes in reflection.


Legal Clap Back Vs. Power Move

Attorneys representing more than 30 of the migrants flown to Massachusetts this week asked the US Attorney for Massachusetts and the state's attorney general to open criminal investigations into the flights.

Criticism in the US of the oil industry's obfuscation over the climate crisis is intensifying after internal documents showed companies attempted to distance themselves from agreed climate goals, admitted "gaslighting" the public over purported efforts to go green, and even wished critical activists be infested by bedbugs.

Chinese President Xi Jinping has reportedly told Russian President Vladimir Putin that China is ready to team up with Russia during their sideline talks at the Shanghai Cooperation Organization's summit in Uzbekistan. Addressing Putin as his "dear and long-time friend," Xi said the two leaders had maintained "effective strategic contacts, particularly through phone calls" amid the COVID-19 pandemic, according to Russian news agency TASS.

The World's largest beer festival which kicked off Saturday in Munich, Germany will run through Monday, October 3.

Blake Lively is sharing her first pregnancy photos for baby No. 4 - and sending a powerful message to the paparazzi. "The Rhythm Section" actress took to Instagram on Saturday to share a series of snaps featuring her baby bump, including ones with her husband Ryan Reynolds and pal Taylor Swift.

NEW DELHI (AP) - Seven decades after cheetahs died out in India, they're back. Eight big cats from Namibia made the long trek Saturday in a chartered cargo flight to the northern Indian city of Gwalior, part of an ambitious and hotly contested plan to reintroduce cheetahs to the South Asian country.


Advice From Down Under


Welcome To The Late Season Surge

Stop me if you've heard this before. Actually, don't, because you've heard it a bunch of times this year, but Brady Singer pitched very well again today. His ERA as a starter this year is now at 2.93. At what point do we stop saying it's a small sample size?

This story was first published in KCUR's Creative Adventure newsletter. You can sign up to receive stories like this in your inbox every Tuesday. Though the weather doesn't quite feel like September, autumn officially arrives next week - bringing with it lower temperatures (we hope!) and all our favorite fall activities.

Chiefs' Defense Is Ahead of Schedule Through Two Games

The Kansas City Chiefs defeated the AFC West division rival Los Angeles Chargers 27-24 in front of a ruckus crowd on Thursday night at GEHA Field at Arrowhead Stadium. On a night where the offense struggled quite a bit, especially in the first half, the defense held its ground and kept the team in the game before ultimately winning it.

Each day thousands of Kansas City commuters drive over the Missouri River, but few have ever taken a boat ride on its waters. Local sculptor and artist Roger MacBride wants to change that. "This my river." MacBride says.

Get ready for near-record heat the next few days

Hide Transcript Show Transcript TOKYO. THIS IS 9:00 IN THE EVENING, HIGHEST CHANCES WILL BE MAINLY TO THE WEST AND NORTHWEST OF THE METRO AREA. SO ATCHISON AND BACK INTO CENTRAL KANSAS, UP IN THE NORTHWEST OR MISSOURI, THIS IS MIDNIGHT.