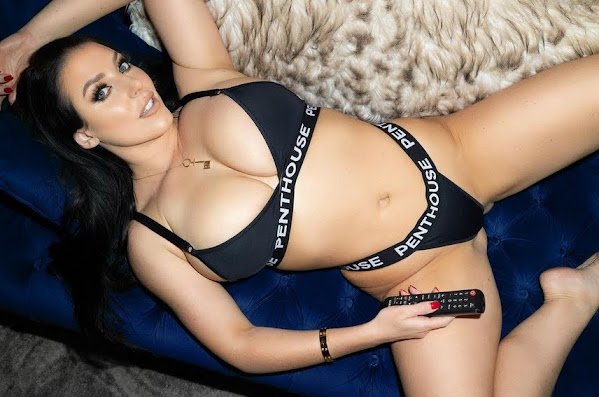 Tonight we dedicate this quick round-up peek to hottie Angela and those loyal denizens of the discourse who don't have anywhere special to be this holiday weekend.

KANSAS CITY, Mo. - With the high cost of travel, many families around the Kansas City metro are opting in on staycations. " We usually just grill out at home, but since we have access to the kayaks this weekend, it's the lake," said Sarah Calhoon, who spent Saturday at Longview Lake with her family.

Police have issued a silver alert for a missing 86-year-old man. Kenneth Scafe was last seen Saturday at 7:45 a.m. leaving his home near 39th and Crane streets. He's 6 feet, 210 lbs, wearing blue flannel pajamas, no shoes and a black Mizzou hat.Police say Scafe is an Alzheimer's patient.Police ask anyone who sees Scafe call 911 to get him reunited with his family.

KANSAS CITY, Mo. - One person is in serious condition after an overnight single-vehicle motorcycle crash Saturday morning. Investigators said a black Honda 125cc motorcycle was traveling eastbound on independence Avenue around 1:30 a.m when the driver lost control and went off the roadway to the right and struck the curb.

KANSAS CITY, Mo. - Let's go to the movies! Theaters across the country are on board with the first ever National Cinema Day. On September 3, the newly-launched event will allow audiences to experience being in the theater and enjoy movies for only three dollars.

Fifteen beagles arrived in Merriam, Kansas this week, rescues as part of a major animal abuse case out of Virginia.

Inside the life of adult film actress Angela White

FANS of adult movies may be familiar with the work of Angela White. Since her rise to fame she has earnt a fortune and now has a HUGE wealth. Angela Gabrielle White is an Australian adult film actress and director, who was born on March 4, 1985, which makes her 37-years-old.

CNN is facing questions from critics after the network was busted altering the lighting for President Biden's Thursday address, softening the blood-red hues to calmer shades of pink. The president came in for withering mockery online for the harsh black and red backdrop, with many comparing the optics to "Star Wars" and "V for Vendetta."

Trump rallies for Oz, Mastriano in Pa. amid midterm worries

MYERSTOWN, Pa. (AP) - Larry Mitko voted for Donald Trump in 2016. But the Republican from Beaver County in western Pennsylvania says he has no plans to back his party's nominee for Senate, Dr. Mehmet Oz - "no way, no how."

As UN inspectors sought to avert a nuclear disaster on Ukraine's frontline, the West and Russia wounded each other's economies, with Moscow keeping its main gas pipeline to Germany shut on Saturday while threatened with price caps on oil exports.


Another Boost To Survive This Year

This past week, the FDA and CDC signed off on updated COVID-19 vaccines to boost protection against newer variants of the virus, in an effort to limit an anticipated seasonal surge in infections this fall. Dr. Peter Hotez, co-director of the Center for Vaccine Development at Texas Children's Hospital, joins Geoff Bennett to discuss.

Marshall lives in west Jackson, in the US state of Mississippi - a predominantly black and poor part of the city. He has no choice but to drink the tap water that Jackson residents have been told to avoid. When he turns the tap on - the water runs brown.

NASA's Artemis I: What to Know About the Massive Moon Mission

Right now there's a 32-story rocket mounted atop a launchpad at NASA's Kennedy Space Center, and it's scheduled to propel a spacecraft to the moon. The Artemis I lunar mission is inching (albeit slowly) toward liftoff. Initially, Artemis I's launch was planned for Monday, but an engine issue forced the attempt to be scrubbed -- Saturday's try No.

Serena Williams scored a stunning upset over No. 2 Anett Kontaveit in Round 2 of the 2022 US Open. The 23-time Grand Slam champion was asked about a bathroom break that seemingly rejuvenated her. "Yeah, no, I just got lighter - use your imagination," she said, adding: "But it wasn't number two."

A nursing mother says her husband is one of the luckiest men alive because of how breastfeeding has changed her body. It's National Breastfeeding Month, and TikTok mom @ bobbialthoff's message on body acceptance is one for the ages.

The Royals' new hitting approach makes a lot of sense

The Royals' broadcast over the past few weeks has been raving about the team's newest approach to hitting baseballs. And well they might! In a variety of small sample sizes, the team has nine different players, either active or on the IL - and most of them rookies, hitting at least league average according to the wRC+ stat.

KANSAS CITY, Mo. - Jack Bolinger's days as a pilot began way back in the 1940s. Bolinger, 99, enlisted into the U.S. Air Force right after high school. After training with the Air Force for two years, he became a multiple engine pilot and eventually a first lieutenant.


Maybe Rain In The Forecast

Partly to mostly cloudy and comfortable tonight with temperatures falling into the low to mid 60s by daybreak on Sunday. The cold front finally pushed through Kansas City and will likely stall along or just slightly east of I-35. This will allow cooler temperatures to be felt across parts of northeast Kansas and northwest Missouri.