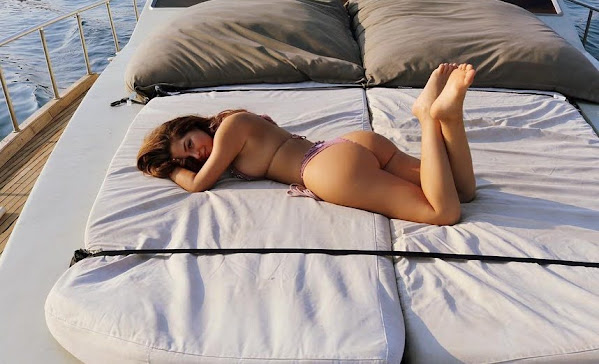 For the weekend hottie Demi inspires this peek at pop culture, community news and top headlines.

KANSAS CITY, Mo. - If you want your business to take part in the NFL Draft the clock is ticking. The draft is expected to have between $100 million and $200 million economic impact on Kansas City. Of course you can't have a national event in Kansas City without barbecue.

KANSAS CITY, Mo. - More than 500 people came with their bikes in hand Saturday morning at Longview Lake Beach to honor a late cyclist, teacher and father of 10, Charlie Criniere, who died last month in a hit-and-run crash in Kansas City, Missouri.

As the Missouri state legislature gathers for a special session on tax reform, one lawmaker is trying his luck, hoping to get a sports betting bill on the books. KMBC 9 spoke with State Representative Dan Houx about why he says now is the time for Missouri to get in the game.

TOPEKA, Kan. - The Kansas Department of Transportation announced Friday that it will receive $39.5 million toward building a statewide electric vehicle charging network. The federally funded National Electric Vehicle Infrastructure Formula Program will dole out the funds over the course of five years.

Kansas City culture wouldn't be the same without fall fairs and festivals. But what's celebrated and by whom has changed a great deal throughout the city's history. An alarmed reader recently wrote to What's Your KCQ?, a collaboration between the Kansas City Public Library and The Kansas City Starafter running across a souvenir from an 1895 parade in the city on eBay.

Demi Rose Mawby has shared a clip of her best bits from Burning Man festival. In the video, Demi can be seen prancing around in big budget outfits which barely cover her modesty at points as she enjoyed the festival with friends.

Biden says he plans to run for reelection in 2024, but here's one reporter's lesson from 2008 on why anything is possible

In 2008, Joe Biden talked with reporter Nicole Gaudiano about his political future. It turned out nothing like he'd predicted. Now he says he expects to run for re-election in 2024. Could his plans change? President Joe Biden says he plans to run for reelection in 2024, but I know better than to make any predictions on his next steps.

AOC doubles down after Republicans transport migrants to Washington, DC: 'Crimes against humanity'

Rep. Alexandria Ocasio-Cortez on Friday doubled down on her criticism of the transportation of migrants from the U.S.-Mexico border to various areas across the country. In a tweet, the New York Democrat called recent actions by Florida Gov. Ron DeSantis and Texas Gov. Greg Abbott "appalling" and likened them to "trafficking."

George Conway said Trump is threatening to incite violence if he gets indicted: 'It's just like January 6 all over again'

George Conway accused former President Donald Trump of threatening to incite violence again. Conway said he's acting like he's "being persecuted for no valid reason" in relation to Mar-a-Lago. "He is absolutely encouraging people to engage in violence," Conway said on CNN.

Another 50 migrants arrived at Vice President Harris' residence at the US Naval Observatory on Saturday. The arrivals, who mostly hailed from Venezuela and included a one-month old baby, were quickly collected by aid workers and taken to a shelter, Fox News reported.

The White House today criticized the volatility and lack of transparency amongst decentralized cryptocurrencies, and promoted research into a Fed-controlled cryptocurrency known as a Central Bank Digital Currency (CBDC) Crypto experts speaking to the Daily Caller News Foundation questioned what a CBDC could provide to the U.S.

A U.S. appeals court on Friday upheld a Texas law that bars large social media companies from banning or censoring users based on "viewpoint," a setback for technology industry groups that have argued that the Republican-backed measure would turn platforms into bastions of dangerous content.

As farmers split from the GOP on climate change, they're getting billions to fight it

If you ask Iowa farmer Robb Ewoldt about the federal dollars he's received over the last few years to help make his land more sustainable, it's clear he's a big fan. "It works out really well in our operation," says Ewoldt, who farms corn and soybeans on "just shy of 2,000 acres" near Davenport, Iowa.

Graham's abortion ban bill baffled even some Republican strategists who say the GOP should focus on issues such as crime and economic problems under Biden.

Mexico will present a peace plan for Ukraine to the United Nations general assembly next week, President Andres Manuel Lopez Obrador says. Agence France-Presse reports that the proposal is for Pope Francis, the UN secretary general, Antonio Guterres, and the Indian prime minister, Narendra Modi, to form a dialogue and peace committee.

'We Struggle To Heat Our Homes': King Charles III Gets Heckled In Wales

King Charles III was heckled Friday in Wales outside the Welsh Parliament when he went over to greet cheering members of the public following the death of his mother, Queen Elizabeth II, on September 8. She was 96.

Pat Sajak reveals he may leave 'Wheel of Fortune' after Season 40: 'End is near'

Pat Sajak may be stepping down as the host of "Wheel of Fortune." The game show host of more than 40 years said the "end is near," as he hinted he's ready for one last spin, according to "Entertainment Tonight." "Years go by fast. We're getting near the end.

Kansans, along with Missourians who make the trip, are cashing out on sports bets

KANSAS CITY, Kan. - Sports betting is a winning business in Kansas. It's bringing Missourians across the state line to place wagers, including Demetrius, who spoke to KSHB 41 during Thursday night's Kansas City Chiefs game against the Los Angeles Chargers. "I love to place the wagers in cash," Demetrius said.

Patrick Mahomes: 'We scored when we needed to score'

Last season, the Kansas City Chiefs suffered an early-season home loss to the Los Angeles Chargers that helped set a frustrating tone for the first half of the season.

A collaborative project to "bridge the gap" in Kansas City's digital divide secured one of the 2022 Heartland Challenge grants from the Ewing Marion Kauffman Foundation. PCs for People Kansas City (formerly Connecting for Good), in partnership with The Usher Garage and No-Where Consultants , will receive $240,000 in funding to be used over two years for the development of a new Digital Readiness Assessment Tool.

On this week's episode of the Northeast Newscast, we're at the historic Elmwood Cemetery with Northeast resident Brad Finch. He's starting a business to clean up overgrown and deteriorating headstones, restoring dignity and improving the appearance of the grounds he often walks.

A Saturday with chances for scattered storms

Hide Transcript Show Transcript LIKE FUN. MATT: ALTHOUGH IT DOES NOT FEEL LIKE FALL OUTSIDE. KATIE: IT IS THE LAST WEEK AND BEFORE IT IS OFFICIALLY FALL NEXT WEEKEND. MATT: SEEMS LIKE THIS MIGHT BE SUMMER'S LAST BREATH. KATIE: AND IT IS A DRAGON BREATH.

Stephen Sanchez - Until I Found You is the song of the day and this is the OPEN THREAD for right now.