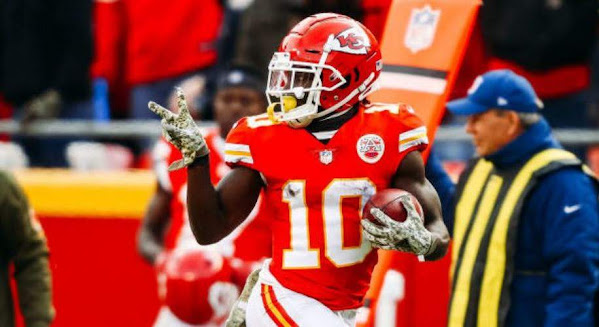 Sorry, that's wishful thinking but this post helps expand the myth that the team can do without the fastest man in the NFL.

On Sunday, the Dolphins saw Hill make his debut for the team against the New England Patriots and, to no one’s surprise, Hill has looked electric for the most part. With a whole quarter to go (as of press time), Hill already has 8 catches for 94 yards and a six-yard run that gives him 100 yards from scrimmage in his first game in Miami. Hill could have a scarecrow for a quarterback and he’d still produce positive yards. That said, not everything is going that great.

Tyreek Hill is going to miss Patrick Mahomes after all

When the Kansas City Chiefs traded wide receiver Tyreek Hill to the Miami Dolphins back in March, it was a shock of a blockbuster trade that altered the future for both franchises. For the Fins, it gave them a truly elite wide receiver to pair to help a burgeoning young offense take the next step (or two).


No Tyreek Hill, no problem for Chiefs offense in Week 1 vs. Cardinals

GLENDALE, Ariz. - Kill all the noise about the Kansas City Chiefs offense without Tyreek Hill. On Sunday, the Chiefs' 44-21 drubbing of the Arizona Cardinals saw the offense cooking with gas. Patrick Mahomes went 30 for 39 with 360 yards and five touchdowns and broke another milestone with this being his sixth game with 5+ touchdown passes.