The tax fighters from Citizen For Responsible Government are sounding the alarm against historic tax hikes at stake in the next courthouse election.

Their prediction is dire . . .

CFRG CLAIMS TAXES COULD RISE BY NEARLY 50% NEXT YEAR UNDER THE CURRENT ADMINISTRATION!!!

And so, they're backing a candidate they believe will stand up against this hot mess in the making.

Jackson County residents will experience a 40% to 45% AVERAGE Property Tax increase next year.  Average means some residents will get a higher increase than the 40% - 45%.  This will affect everybody who owns property in Jackson County.  The only people who will escape this massive increase are the developments which  have secured Tax Free deals from the City.

THIS IS THE BIGGEST LOCAL NEWS STORY OF THE YEAR AND NOBODY IS TALKING ABOUT IT!

Our good friend, JOHN MURPHY is the only person running for office that is tuned in on this horrible decision.

John has a great idea for freezing property taxes for retirees and people on fixed incomes.  John stands up for many other ideals.  He supports all local law enforcement . . . John would be a great addition to County government.

Here are more deets about the campaign AND the tax increases it hopes to fight. 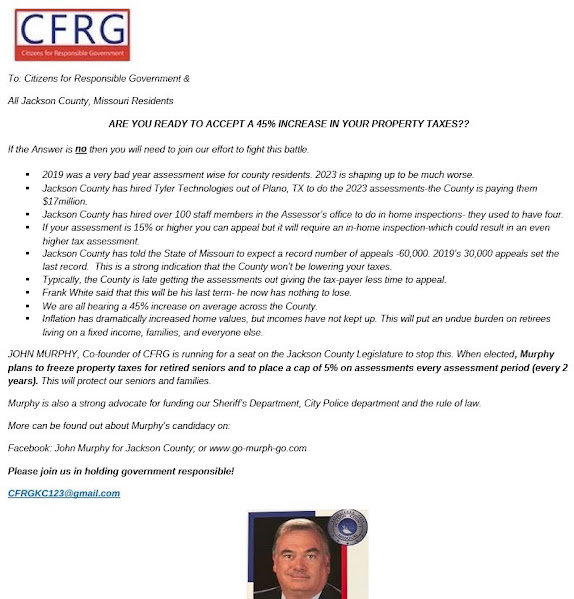