Guv DeSantis Airlift Double Down: Who Won The Local Debate??? 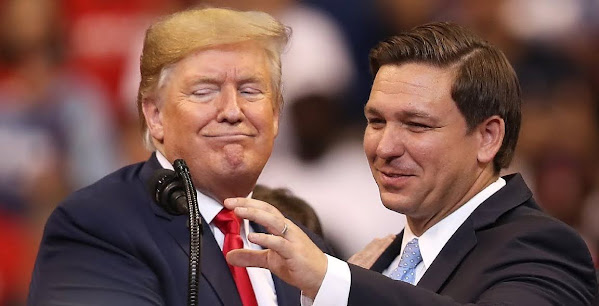 Here's what is probably a better question . . .

Why did Fl. Guv DeSantis come here . . . Anybody remember? Who did he endorse???

Anything ring a bell???

And that doesn't bode well for Kansas Republicans as they suffer a classic marketing mistake. Their promotion was more memorable than their product.

"Conservative radio host Pete Mundo, speaking earlier in the program, called the flights arranged by the Florida governor as "one of the most savvy political moves I've ever seen in my lifetime" and suggested sending protesters outside the event to Martha's Vineyard. Kansas GOP Sen. Roger Marshall said in his remarks that he asked DeSantis backstage, "How I could get a ticket to drive one of those buses from the border to the Delaware beach?"

"The actions by DeSantis and Texas Gov. Greg Abbott, who sent migrants to Washington, DC, were widely criticized by local officials in the cities where the migrants arrived unannounced, as well as by Democrats and the White House. President Joe Biden accused the Republican governors of "playing politics with human beings."

CNN TALLAHASSEE - Speaking in Kansas on Sunday, Gov. Ron DeSantis gave every indication he intends to capitalize on the latest wave of attention that has followed from his sending migrants to Massachusetts last week. "This is a crisis.

The spreading push from Republican governors to relocate undocumented immigrants into blue enclaves marks a new escalation of the red state drive to seize control of national policy from below, not only on immigration but on a broad array of domestic policies.

AUSTIN, Texas (AP) - A Texas sheriff on Monday opened an investigation into two flights of migrants sent to Martha's Vineyard by Florida Gov. Ron DeSantis, but did not say what laws may have been broken in putting 48 Venezuelans on private planes last week from San Antonio.

Stephen Colbert tore into Florida Gov. Ron DeSantis (R) for "kidnapping" migrants and flying them to Massachusetts for a political stunt. And that's not all. "It turns out it was way worse than we imagined because he actually abducted them from Texas," Colbert said.

In recent days, Donald Trump has privately voiced his anger over Florida Republican Gov. Ron DeSantis sending planeloads of migrants to Martha's Vineyard. Trump's displeasure, however, has nothing to do with moral revulsions at the governor using human beings as unsuspecting pawns for a political attack.