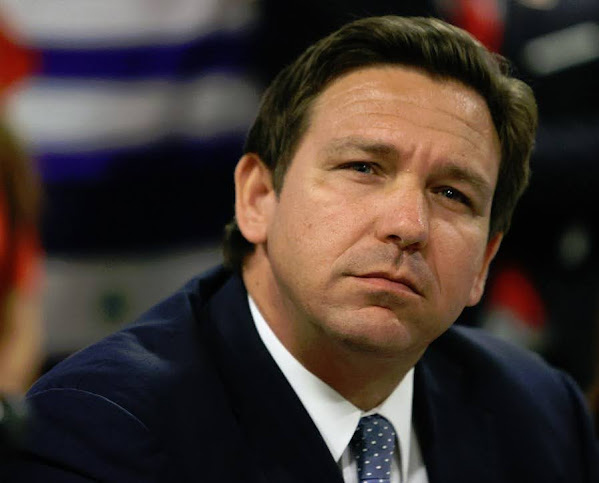 We talked about the Olathe rally & counter demonstration this morning . . .

"Although local political experts say immigration is not a major talking point for Schmidt, it was widely referenced Sunday by each person who stepped up to the podium.“The average person. To just put that many people in American communities is difficult," DeSantis said. Schmidt's time was mainly dedicated to conversations surrounding schools.“Parents and students in Kansas should not have to settle," Schmidt said. "That’s why I will sign into law a parents' bill of rights as soon as I become governor.”He also brought up removing transgender athletes from school sports, a platform DeSantis has already delivered on in his home state.Outside the convention center, opponents and Gov. Kelly supporters turned their focus to the continued issue of abortion and bodily autonomy.“My right to my own body is still on the table," said voter Cassie . . . "The judges are on the table.”Protesters held signs and chanted as rally attendees entered the parking lot."

OLATHE, Kan. - One of the most polarizing figures in American politics rolled into Olathe today. Florida Governor Ron DeSantis flew in to rally support for Kansas GOP governor candidate Derek Schmidt. Outside, supporters of Democratic incumbent Laura Kelly made their voices heard too.

More than 50 protesters gathered outside a campaign rally in Olathe, Kansas, for Republican governor candidate Derek Schmidt, which featured an appearance and endorsement by Florida Gov. Ron DeSantis. Jae Moyer, president of the Kansas Democrat LGBTQ caucus, said they protested the event to take a stand against both Schmidt's and DeSantis' policies.


In visits to Kansas and Wisconsin, DeSantis gets standing ovation from GOP voters after flying migrants to Martha's Vineyard

OLATHE, Kan. (CNN) -- Florida Gov. Ron DeSantis, speaking in Kansas on Sunday, gave every indication he intends to capitalize on the latest wave of attention that has followed from him sending migrants to Massachusetts last week. "This is a crisis.