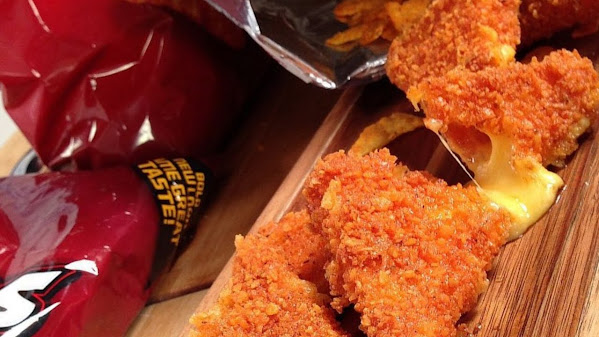 A new item on the menu that should inspire the Chiefs to move far, far away . . .

"Doritos will kick up the flavor of these empanadas. Encrusted with Doritos, the snack includes ground beef, onions, cheddar jack cheese, and avocado crema. The empanadas can be ordered in section 111."

There is a morbid curiosity here in much the same way that so many of our right-wing friends deride "cucks" but can't seem to abandon their obsession/fascination with the idea of challenging traditional gender roles and subverting power relationships in the bedroom - Seriously, go back and think about how many times we've heard "cuck" mentioned since 2016 and maybe realize that meaning behind the slur seems to giveaway an obvious cultural attraction to the taboo topic.

The snack is out of the bag. A surprising new meal will be making its debut at Arrowhead Stadium in 2022.Sports business reporter Darren Rovell took to Twitter on Wednesday to confirm that a new novelty item has been added to the menu at Chiefs games this season.

KANSAS CITY, Mo. - Chiefs fans will have some new options when they head to GEHA Field at Arrowhead Stadium next week for the team's home opener against the Chargers. Two locally owned restaurants will infuse their flavors into the game day tradition this season.

How America turned into a nation of snackers

Forget breakfast, lunch and dinner. People can't get enough of the in-between.

The downside of the American diet . . .

One in 10 US households struggles to afford enough food, study finds

One in 10 American households struggled to afford to feed their families last year, with more than 5 million families missing meals and cutting portions due to poverty, new government research reveals. Families with children accounted for almost half of the country's food insecure households, with 2.3m unable to afford adequate nutritional food at times during 2021, according to the annual food insecurity report by the USDA.

A political spin and how tamales cost the GOP the White House back in the 70s . . .

Eating While Politicking Is Harder Than It's Ever Been. Here's Why.

On April 9, 1976, President Gerald Ford was in San Antonio, Texas, touring the Alamo, when someone gave him a tamale on a plate. Ford gratefully shoved the tamale, husk and all, into his mouth. According to some accounts, he began to choke.