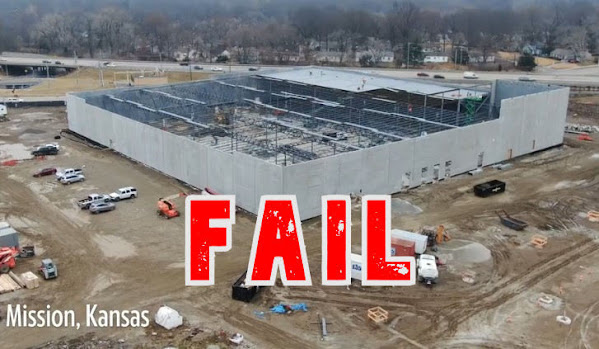 Special thanks to the BEST & BRIGHTEST TKC READERS for keeping us focused on this longstanding vaporware project.

THIS MIGHT BE THE WORST DEVELOPMENT IN THE METRO AND POLITICOS & THE PUBLIC ARE JUSTIFIABLY SKEPTICAL!!!

The FAIL is the stuff of legend and with no cash to make anything happen so far . . . Throwing good money after bad is FINALLY starting to seem like a bad strategy.

Here's a slightly more optimistic blog quote about the process . . .

"This is the fifth iteration of a plan to remake the prominent site at Shawnee Mission Parkway and Johnson Drive, where the old Mission City Mall used to be.

"Still, based on the project’s troubled history, some city councilmembers on Wednesday voiced concerns about the project as it moves forward.

Wanting to avoid another "false start," as one official put it, the Mission City Council on Wednesday talked at length with developers of the long-delayed Mission Gateway project about the $268 million development's current financing ahead of key votes later this month.