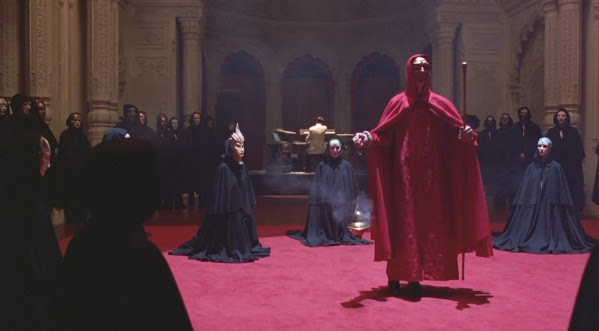 Actually, our bloggy friends are being a bit too dramatic given that every major city in the nation has to cope with greedy developers.

Still . . . We'd be pretty easy to pick out of a masked crowd . . . Possibly the only guy who would wear a baseball hat and drink coffee at a group sex party.

However, we respect their salesmanship in making a point about backroom JoCo deals that were once dominated by KCMO . . . Check-it . . .

Concerned about the shadow government role the Overland Park Chamber of Commerce plays in development decisions and its political influence on the council.

“We contract with the extraordinarily conflicted Chamber of Commerce. We pay somewhere around $650,000 a year for their expertise in providing development advice to the council, which they turn around and sell to developers.

“It’s said you can’t win (a council seat) without the Chamber.  I think I was the first, and now we have several independently elected members.  Hence the reason almost all control has been removed from the council and put in the hands of selected representatives to handle. I’d say around 75% of the work on the future of Overland Park is done outside of council chambers, which should say a TON about our political machine.”

The "shadow government" in the City of Overland Park - The Sentinel

In his farewell address, President Eisenhower warned of the future influence of a "military-industrial complex"; the nexus of special interests and bureaucracy that, if unchecked, could threaten representative government. The Kansan's words echo today for a pair of Overland Park city councilmen, who issue a clarion call against what they see as a "shadow government" operating in the city of nearly 200,000.