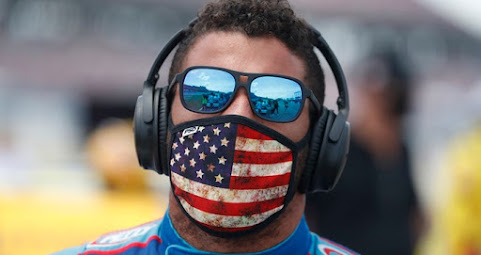 There was stunning achievement for diversity and equity in the Dotte but that has mostly been ignored by our local media.

Here's a triumphant statement that quite a few people missed . . .

“Just so proud. Pit crew was awesome today. Just thankful. Thankful for the opportunity. And thankful to shut the hell up for a lot of people,” Bubba Wallace said in his post-race interview with NBC Sports.

Wallace is the only black driver in the NASCAR Cup Series, which leads to scrutiny about whether he can win on the track. He has many fans, and seemingly just as many detractors.

He proved again on Sunday that he can.

A nasty incident with a noose involving this rising star soured a great many fans about the "sport" that involves inhaling as fumes.

We're not sure our pals in the media are willing to celebrate a "sport" wherein burning fossil fuels is a big part of a winning strategy.

KANSAS CITY, Kan. - Driving the same car number that carried teammate Kurt Busch to victory in the May race at Kansas Speedway, Bubba Wallace claimed a dramatic win at the same track in Sunday's Hollywood Casino 400, the second event in the first round of the NASCAR Cup Series Playoffs.

There was chaos at Kansas. Blown tires. Pit-road mistakes. Multi-car crashes. Trouble on the playoff grid. Bubba Wallace rose above it all. Wallace emerged late in the afternoon as a power in Sunday's NASCAR Cup Series race at Kansas Speedway and held on to score the second win of his career.