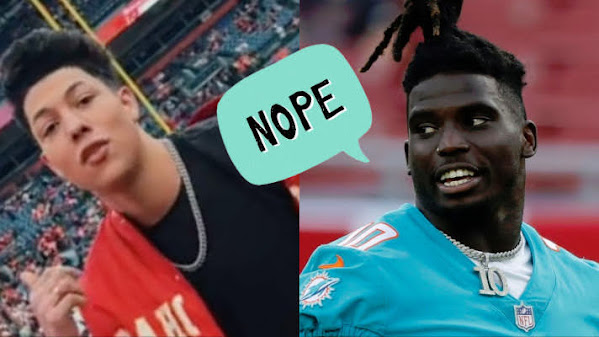 In a recent string of interviews, it's clear there is still a great deal of animosity against the Kansas City Chiefs from the fastest man in the NFL.

Tyreek Hill doesn't seem to feel like the Chiefs offered him much respect when they parted ways.

“And a lot of guys when they get paid, they stop wanting to get better,” Hill told OutKick’s Armando Salguero. “And I feel like when the Kansas City Chiefs traded me I kind of took that personal. So now what really motivates me is I feel like they basically just threw me to the side, like I was trash or something.

But the fun doesn't stop with tragic comparisons about front office treatment . . .

This social media juxtaposition is also worth considering as it joins in mocking the least favorite Mahomes amongst local football fans:

During a visit on the BS w/ Jake Paul podcast, Hill was asked by Paul’s girlfriend Julia Rose if he would handcuff himself to Patrick Mahomes’ brother Jackson for another Super Bowl win.

Rose asked Hill, “Would you get handcuffed to Jackson Mahomes?”

Before she could finish the question Hill responded by saying, “oh no, no, no, no way.”

After Hill asked for some clarification, Rose finished her question, “for 24 hours to win another Super Bowl?”

Hill responded, “I ain’t even going to cap to y’all. That Super Bowl can god d*mn wait.”

Dolphins' Tyreek Hill: Chiefs 'Basically Just Threw Me to the Side, Like I Was Trash'

Tyreek Hill (AP Photo/Lynne Sladky) Miami Dolphins wide receiver Tyreek Hill said the Kansas City Chiefs' decision to trade him is providing motivation for the 2022 NFL season. Hill, who signed a four-year, $120 million contract extension after his move to Miami, explained to Outkick's Armando Salguero that he's eager to show the Chiefs made a mistake.


Tyreek Hill says the Kansas City Chiefs 'basically just threw me to the side, like I was trash'

Miami Dolphins wide receiver Tyreek Hill is seemingly still a little hurt by his departure from the Kansas City Chiefs. Hill, who was traded by Kansas City to the Dolphins this offseason, said the team threw him to the side like he was "trash."