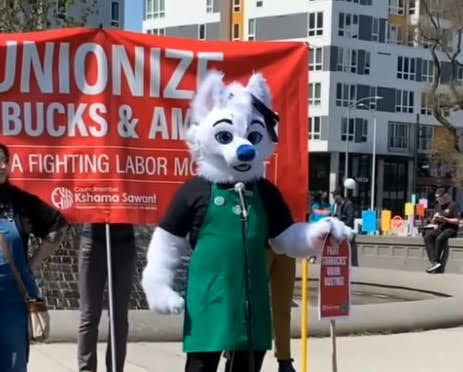 A coffee debate and a recent Kansas City vote are at the center of an argument over collective bargaining.

Here's a quick serving of the hot mess that may or may not involve a furry barista who garnered a great deal of publicity for his union advocacy . . .

The Seattle-based coffee giant wrote in a letter to the chairman and general counsel of the National Labor Relations Board on Monday that the labor board’s officials acted inappropriately during an election in the Kansas City area and has likely acted similarly in other elections. Starbucks cited a career NLRB professional who approached the company as a whistleblower . . .

According to Starbucks, NLRB officials allegedly coordinated with union agents to arrange for in-person voting at the labor board’s offices during mail-in ballot elections. The company also alleges that Workers United agents were given confidential, real-time information about specific vote counts so the union could target employees who hadn’t voted yet. NLRB officials and Workers United then allegedly coordinated to cover up this activity, the company said.

In its statement to CNBC, Starbucks Workers United said that Starbucks is trying to take attention away from its anti-union activity and halt union elections.

Starbucks is asking the federal labor board to suspend all mail-in ballot union elections nationwide, alleging that the board's personnel and the union organizing its baristas tampered with the voting process.

Starbucks is accusing National Labor Relations Board employees of secretly coordinated with union organizers in the Kansas City area - and it wants the agency to halt all mail-in votes nationwide until a full investigation has been conducted. But labor organizers immediately called the move an extension of a broader anti-union campaign.

KANSAS CITY, Mo. - Officials at Starbucks claim that union members conspired with National Labor Relations Board personnel to hinder union elections at an Overland Park location. In a 14-page letter, Starbucks that a long-time NLRB employee notified it of the wrong doing by the NLRB Region 14, which has an office in Overland Park.