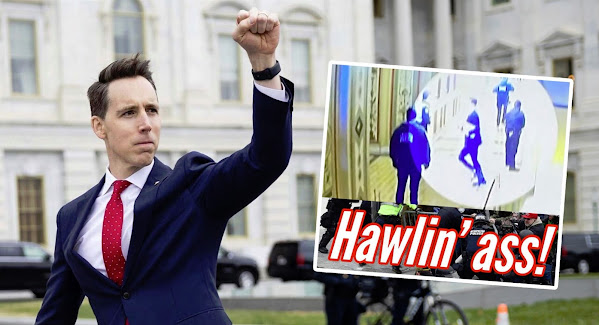 The topic of "manhood" can be touchy . . . Truth is . . . Contemplation on all things manly is mostly a favorite of keyboard warriors who can only talk tough behind a screen . . . Or when their mom hasn't properly supplied enough Hot Pockets to a basement dwelling.

Here are TKC we're fully stocked in snack cakes and that gives us the confidence & good cheer to share this quick missive repeating criticism against a Missouri politico for his seemingly contradictory bit of hallway hustling . . .

Among those most vocal about the supposed crisis of masculinity, Republican Sen. Josh Hawley's much-publicized scamper away from his own insurrectionist supporters inside the Capitol building on Jan. 6 wasn't much of a revelation, though it was objectively hilarious.

Republicans and the crisis of "manhood": Who are the real sex-obsessed pervs in America?

Why do people who attack the gender identities and romantic and sexual affiliations of others often seem so twisted up? I suppose history tells us that it pretty much goes without saying. But we need to speak plainly about it because we are all now hyper-aware of the serious damage that damaged people can do to others - and to society.