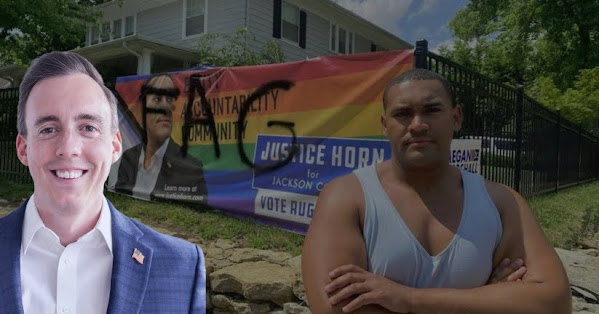 First, the straight campaign news . . . For those who didn't see it yet . . . Justice Horn suffered another setback . . .

KANSAS CITY, Mo. (July 31st, 2022) – Justice Horn, candidate for Jackson County Legislature’s two yard signs were vandalized and stolen in downtown Kansas City on July 31, 2022 in front of KC Wineworks. This incident and the video of it was brought to Justice’s attention at 2 PM today. Justice Horn is the first openly gay person of color to seek this county seat and if elected, would be the first openly gay county offical in the state of Missouri. Justice is no stranger to hostility as he’s received open threats during the Black Lives Matter movement in 2020, which also includes the defacing of a Black Lives Matter mural last year here in Kansas City at our Briarcliff location in the Northland. A couple of weeks on fourth of July weekend, Justice’s campaign banner was also defaced with a homophobic slur and was shortly stolen there after.

Justice Horn: “KC Wineworks has two of my campaign rainbow yard signs in front of their place in downtown Kansas City. They just sent me this video of a man vandalizing both signs before throwing one into the street and stealing the other from last night. This is what I’m up against.

From my banner being defaced with a homophobic slur to it being stolen, to a Brookside church being vandalized to a KC Streetcar stop with the message “All Are Welcome” being damaged, and now this.This is why representation is important. If we’re not at the table we’re on the menu, and it’s clear we’re on the menu.”