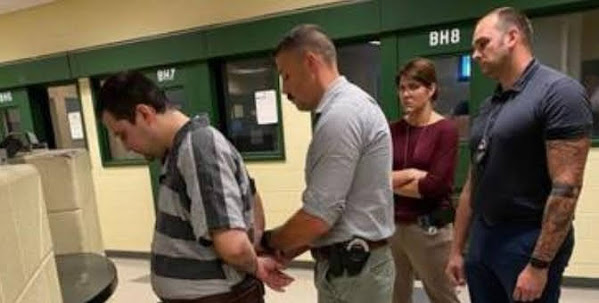 A horrific shooting tragedy on the nice side of the bridge dominated the local Summer news-cycle and now consequences are at hand.

EVEN MAYOR Q HAS SAID DEATH PENALTY IS APPROPRIATE IN THIS CASE: WILL THERE BE ANY OBJECTION TO CAPITAL PUNISHMENT???

Joshua Rocha, 24, was indicted on one count of first-degree murder and one count of armed criminal action in the death of Officer Daniel Vasquez on July 19.

Vasquez, 32, was mortally wounded after he stopped a driver for expired temporary tags near 21st Avenue and Clay Street. Investigators allege Rocha got out of the vehicle and opened fire on Vasquez.

STOPPERS 816-474 TIPS AND A MAN HAS NOW BEEN INDICTED FOR THE MURDER OF NORTH KANSAS CITY POLICE OFFICER, DANIEL VASQUEZ CLAY COUNTY JURORS INDICTED 24 YEAR OLD JOSHUA ROCHA FOR MURDER IN THE FIRST DEGREE. HE'S ACCUSED OF SHOOTING AND KILLING OFFICER VASQUEZ DURING A TRAFFIC STOP IN JULY.