To be fair . . . I think he has attended a few fiestas and gatherings in the meantime.

However, election season is nearly underway and he's stepping up his game.

A quick look at a tax hike pitch that will actually impact EVERYBODY in KCMO . . .

"With the support of Kansas City voters in November, the general obligation bond would fund vital fixes on the Westside and beyond, including the fountain, parks maintenance issues, upgrading our community centers, and it would open pools equitably throughout our city." 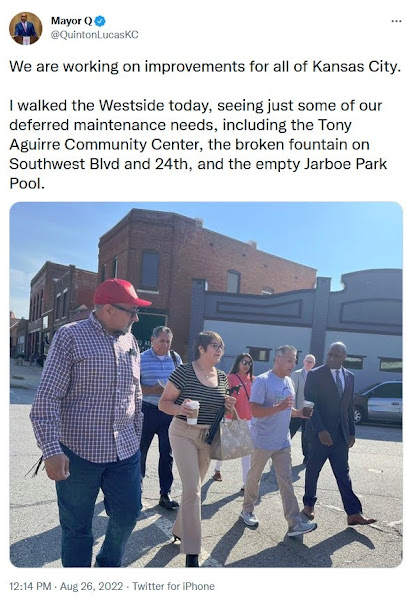 Reality check and a few facts that don't help TKC's political fortunes at all . . .

Earning Latino love whilst taking pix with barrio backgrounds is nice but the cruel reality is that this neighborhood is now dominated by new gentry hipsters building EPIC designer homes that are driving up property taxes as pushing most old school residents aside.

And so . . . All these Chicano art improvements might seem out of place amid other trendy hipster restaurants & yoga studios.

Rising urban crime under Mayor Q's tenure has given many new denizens of the urban core second thoughts about risks of central city life.