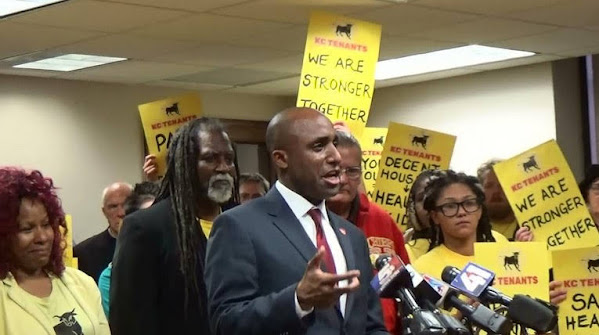 Recent protest might be bad theater and a bit overwrought but they proved partially successful. Mayor Q will have to wait (at least a week) in order to funnel development money through the city manager's office.

Here's another quick peek at the sitch . . .

"KC Tenants says the city’s definition of affordability is out of whack because the figures used are inflated. The federally set median area income that the city relies on averages the incomes of homeowners and renters across the metro area, in rich areas and poor. A better yardstick would be the average earnings of renters within Kansas City, the group says . . ."

"Apartments could be priced as affordable in newly incentivized developments at $1,200 per month, the group said. The full city council will hear more about one of the affordable housing plans on Thursday."

WILL KC TENANTS REMEMBER HOW QUICKLY MAYOR Q TURNED ON THEM COME ELECTION TIME IN THE SPRING?!?

This story is worth Kansas City voters remembering if only to document how quickly allegiances change.

A proposal championed by Kansas City Mayor Quinton Lucas and opposed by tenants' rights groups to change criteria for developer tax incentives and define affordable housing will move forward to the full city council after a vote on Wednesday.Another proposal to reform the tax incentive process will wait until next month.Lucas' affordable housing plan faced fierce opposition from KC Tenants who showed up to speak against both proposals at city hall on Wednesday.